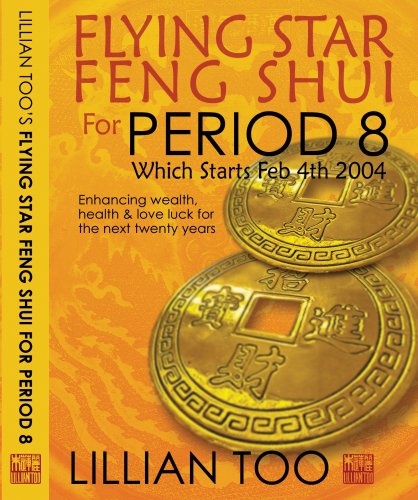 Flying star feng shui for period 8 which started February 4th 2004. This is a great reference book for all the changes we can expect during our current period 8. "Since every period lasts for 20 years, it is very important to ensure that the feng shui of your house is kept up to date so as to improve your health, wealth and happiness" - says Lillian Too. Flying star is the world's most popular method of feng shui used by practitioners to check the feng shui of a property. It is a potent formula that addresses the transformation of Chi energy through the passage of time. The changing flow of chi is expressed as numbers on feng shui natal charts, which change whenever a change in period occurs. This means that the luck of a house can potentially change for either the better or for the worse during the changing of period. This important aspect of the practice of feng shui is the focus of this book. Lillian Too is one of the prominent names in feng shui today and author of over 80 books that have been translated into more than 30 languages with millions of copies sold. Her books are written in a way that is understandable to all readers ñ and that is exactly her intention. She writes,îEverything is simplified so advanced Chinese astrology and feng shui is accessible to everyone, even those with no previous experience with these Chinese cultural practices.î

Lillian Too is the worldís most prolific and highest selling author of books on Feng Shui. Since publishing her first book on the subject in 1995 in Malaysia, she has written over a hundred books and sold over ten million copies to a worldwide audience of readers. Her books have been translated into 31 languages and whole sections of bookstores in capital cities of the world carry shelves of her books on feng shui, astrology and Chinese divinations methods. Lillian graduated with an MBA from the Harvard Business School in Boston USA and at first pursued a very successful corporate career in banking and finance. In Malaysia she headed HONG LEONG CREDIT, a public listed conglomerate of financial companies that included businesses in banking, insurance and stock broking. In 1982 she was appointed CEO of GRINDLAYS DAO HENG BANK, the sixth largest bank in Hong Kong. Following her years in the fast paced finance industries Lillian opted for a change of pace and packaged the leveraged buyout of DRAGON SEED LIMITED, becoming Chairman and shareholder of this group of luxury department store and boutiques. She cashed out this retail business and at the age of 45 retired to become a full time mother. She started her career as a writer in 1995 when she self published her first book on Feng Shui. The book became an instant bestseller in Malaysia and she followed it with a second equally successful book. In 1997, her book THE COMPLETE ILLUSTRATED GUIDE TO FENG SHUI a full color illustrated book published by ELEMENT Publishers of the UK became an instant international hit and was the summer bestseller at the BARNES AND NOBLE STORES in the United States. Following that her LILLIAN TOOíS LITTLE BOOK OF FENG SHUI became a worldwide bestseller including reaching number 1 spot in the UK where the little book sold well over a million copies. The years since then have seen LILLIAN TOOís feng shui books become increasingly popular and today she has become a much loved author famed for simplifying FENG SHUI and popularizing this living skill. She is the worldís #1 selling writer on Feng Shui. She is also its most eloquent advocate and each January she addresses capacity crowds of thousands at her Feng Shui Extravaganza Road Shows. Lillian Too trains Feng Shui Consultants at her Lillian Too Certified Consultants Institute from amongst whose thousands of graduates have emerged some extremely successful feng shui professionals and business people who are practicing in many corners of the world. She is Chairman of WOFS.com, a feng shui merchandising and franchise company managed by her daughter Jennifer Too.