Items related to Between Conformity and Resistance: Women Garment Workers...

Between Conformity and Resistance: Women Garment Workers in Bangladesh 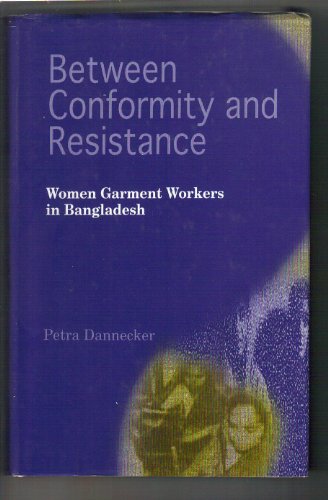 This book contributes to the ongoing discussions and discourses about processes of economic globalization and the so-called feminization of labor that accompany the economic and social transformations taking place world-wide. The focus is on the new modes of industrial production, notably in the export-oriented manufacturing sector in Bangladesh, where there is an increased participation of women in the workforce. The book intends to show how the Bangladeshi women workers view themselves and their actions within the given cultural, political and economic setting. Their migration pattern and motives and the recruitment strategies, from the point of the employers as well as the workers are analyzed. Furthermore, the construction of skill, working conditions and the workers strategies concerning promotions and turnovers are also discussed with reference to approaches about labor market behavior. Additionally, the newly emerging patterns of living arrangements and new domestic relations closely linked to factory work are described and reconstructed according to the narratives of the workers. Strategies of resistance, collective action and their first attempts at organization building are discussed to show that they have room for maneuvering and to develop some suggestions on their future perspectives. The women workers are not simply passive victims of global processes. In a relatively short time they have been able to exploit the new opportunities but have also experienced new insecurities and new modes of control. These are part of the dynamic interplay between local and global structures and reveal the complex, interactive and nonlinear aspects of change. Petra Dannecker lectures at the Faculty of Sociology at Bielefeld University, Germany. She did her M.A. in Political Science from Konstanz University, Germany. In 1998 she received her Ph.D. at the Sociology of Development Research Center at Bielefeld University for her study on women garments workers in Bangladesh.

1. Between Conformity and Resistance: Women Garment Workers in Bangladesh