Items related to The Company Weavers of Bengal: The East India Company...

Hameeda Hossain The Company Weavers of Bengal: The East India Company and the Organization of Textile Production in Bengal 1750-1813

The Company Weavers of Bengal: The East India Company and the Organization of Textile Production in Bengal 1750-1813 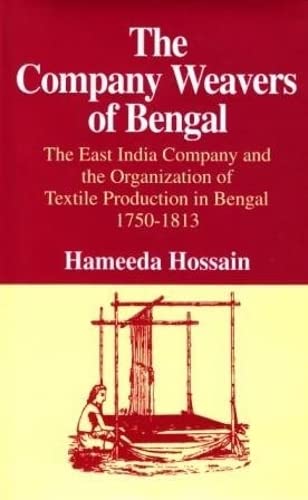 The collapse of the weaving industry in eighteenth-century Bengal has been the subject of considerable controversy. While it has been held that the decline was caused by a stagnant system of production, historians have also argued that the problem was a symptom of colonialism, and lay in the fundamental conflict of interests between British investment in the Indian textile industry and the 'home' manufacturing groups. The present volume contributes fresh evidence and arguments to this subject. Drawing heavily on newly-discovered eighteenth-century Bengali manuscripts that contain the East India Company's correspondence, account books, and deeds of agreement with weavers, Hameeda Hossain suggests that an important reason for the decline of the weaving industry was the Company's attempt to enforce low wages and maintain strict controls over the weavers. This kept the cost of production profitably low for the Company, but led to large-scale attempts by weavers to abscond or default, and resulted in startling drops in the quality and quantity of cloth supplied. The author relates her focus on these organizational changes to the life and working conditions of the artisans who supplied goods to the East India Company, thereby making this book a broad-based study of textile production in Bengal in the late eighteenth and early nineteenth centuries.