Items related to A Tale of Two Cities (Arabic Edition) 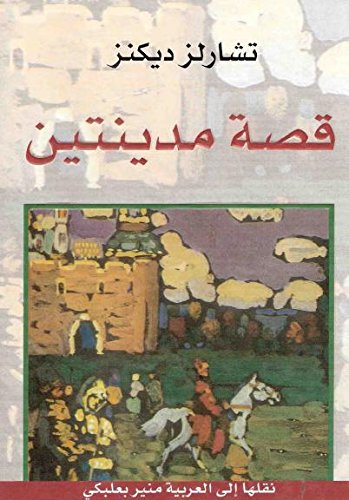 It was the time of the French Revolution — a time of great change and great danger. It was a time when injustice was met by a lust for vengeance, and rarely was a distinction made between the innocent and the guilty. Against this tumultuous historical backdrop, Dickens' great story of unsurpassed adventure and courage unfolds. Unjustly imprisoned for 18 years in the Bastille, Dr. Alexandre Manette is reunited with his daughter, Lucie, and safely transported from France to England. It would seem that they could take up the threads of their lives in peace. As fate would have it though, the pair are summoned to the Old Bailey to testify against a young Frenchman — Charles Darnay — falsely accused of treason. Strangely enough, Darnay bears an uncanny resemblance to another man in the courtroom, the dissolute lawyer's clerk Sydney Carton. It is a coincidence that saves Darnay from certain doom more than once. Brilliantly plotted, the novel is rich in drama, romance, and heroics that culminate in a daring prison escape in the shadow of the guillotine. “It was the best of times, it was the worst of times”, those days in which your English Literature professor ordered you to read “A Tale of Two Cities” by Charles Dickens. You were immediately confounded by the perplexity of the story and confused by the language of the times. In your despair, you struggled, endeavored and persevered to reach the conclusion of the classic novel. Having satisfactorily completed the requirements of that difficult semester, you vowed to never again read classic English literature. As the years accumulated, you garnered wisdom and spirituality as you aged and you gathered far greater literary acumen. Your mind was transformed and you began to yearn for the great stories that could only be told by the true masters. Anon, you found yourself immersed in the incredible classic writings of Charles Dickens. For no one could so completely transport you to the mean filthy streets of Oliver Twist’s London or the horror and dread of The Reign of Terror in that unfortunate tale of London and Paris in the year one thousand seven hundred and ninety-three. No other writer could place you so deeply into the mind of a tyrannical boss such as Ebenezer Scrooge or imbue the viciousness of a violent revolutionary the likes of Madame Defarge. Contemporary writers only wish they had the amazing ability to create magnificent unlikely heroes and fantastic characters whose flame of eternal hope burned against an all consuming darkness.

The classic, definitive, world-famous Nonesuch Press edition of 1937, finally available again and bound in leather and linen. The text in these stunning volumes is taken from the 1867 Chapman and Hall edition, which became known as the Charles Dickens edition and was the last edition to be corrected by the author himself. The Nonesuch edition contains full-color illustrations selected by Dickens himself, by artists including Hablot Knight Browne ("Phiz"), George Cruikshank, John Leech, Robert Seymour, and George Cattermole.

The Nonesuch Dickens reproduces the original elegance of these beautiful editions. Books are printed on natural cream-shade high quality stock, quarter bound in bonded leather with cloth sides, include a ribbon marker, and feature special printed endpapers. Each volume is wrapped in a protective, clear acetate jacket.

The books are available as individual volumes, or as sets. The six-volume set contains Oliver Twist, Bleak House, Christmas Books, Nicholas Nickleby, David Copperfield, and Great Expectations together with Hard Times. The three-volume set contains A Tale of Two Cities, Little Dorrit, and The Life and Adventures of Martin Chuzzlewit.

With his sublime parting words, "It is a far, far better thing that I do, than I have ever done..." Sidney Carton joins that exhalted group of Dickensian characters who have earned a permanent place in the popular literary imagination. His dramatic story, set against the volcanic fury of the French Revolution and pervaded by the ominous rumble of the death carts trundling toward the guillotine, is the heart-stirring tale of a heroic soul in an age gone mad. A masterful pageant of idealism, love, and adventure -- in a Paris bursting with revolutionary frenzy, and a London alive with anxious anticipation -- "A Tale of Two Cities is one of Dickens's most energetic and exciting works.