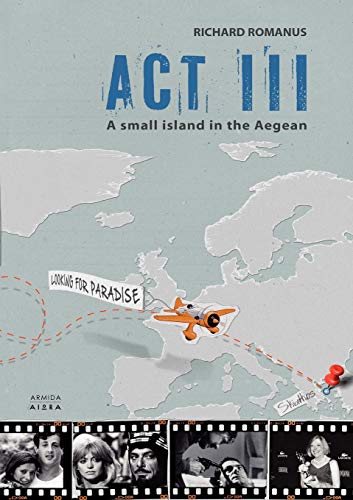 A successful Hollywood couple decides that if life is structured like a movie, then why shouldn't the last act be spent indulging themselves in the hopes of realizing any leftover dreams? So the couple sells their house, pack up all of their belongings, and together with their large black standard poodle, Guido, and twenty-two boxes start their last act by deciding to go merrily on their way to no place in particular until they find paradise. Their first stop is Skiathos Island, Greece. What ensues is a comedy where these two Hollywood types are forced to deal with the Byzantine labyrinth of Greek bureaucracy, the peculiar Hellenic version of time, and a complete host of new challenges such as the neighbours' goats who insist on eating their newly planted English roses. In the process the couple learns to appreciate and treasure the innocence and the generosity of the people of this small island and learn things about themselves that they had long forgotten in the pace and glitz of Hollywood. Paradise indeed.

Born in Vermont and raised in Vermont and Connecticut, Richard Romanus (1943) attended Xavier University and received a BS in Philosophy. He then attended the University of Connecticut Law School for a year, after which he left school to pursue a career as an actor. He studied at the famous Actor's Studio with Lee Strassberg and his first major role came as the character "Michael" in Martin Scorcese's classic film Mean Streets. In the years that followed Richard Romanus performed in numerous stage productions, films and television shows. In addition to his acting, Richard Romanus is credited as the composer on several films. Together with his wife, Anthea Sylbert, he also wrote and produced Giving Up the Ghost in 1998 and If You Believe in 1999, for which they were nominated for a Writers Guild of America award for Best Original Screenplay. Since the end of 2001 Richard and Anthea have been living in Skiathos, Greece.