Items related to Heat and Mass Transfer in Mhd Flows (Theoretical and... 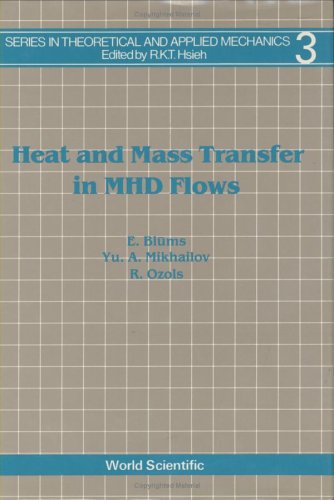 Control of heat and mass transfer processes by means of external force effects is one of the most important problems in modern applied physics. This book is devoted to the study of the magnetic field effect as it bears on transfer phenomena: heat and mass transfer. In conducting media, this influence is mainly due to the induced electric current and the interaction of the current with the magnetic field, whereas in magnetizable fluids, molecular or colloidal solution, transfer phenomena are directly affected by the field. When analysing heat and mass transfer in multiphase magnetizing media, only those phenomena which could be described in terms of conventional quasi-stationary approximation are considered. The effects assoicated with the non-equilibrium magnetization of the system and particle interaction receive special attention here. The problem studied here have been considered with a view to possible applications, particularly in biology and medicine.