Items related to Rivals in Eden: the History of the Seychelles 1742-1818

McAteer, William Rivals in Eden: the History of the Seychelles 1742-1818 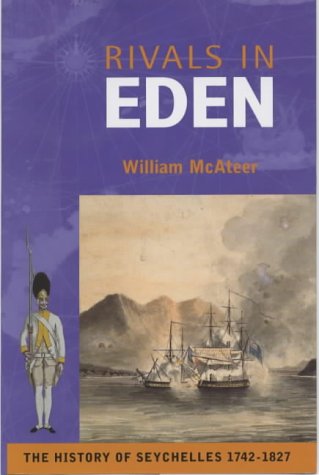 Review "His (McAteer's) perception of history is pretty close to that of the French 'Ecole des Annales' pioneered by the late Fernand Braudel. -- The People newspaper, Seychelles, August 29, 2002 "McAteer makes the soldiers, sailors and adventurers of different sorts come alive for us in their delightful volume." -- Regar newspaper, Seychelles, August 23, 2002 "This is a book Seychelles has been waiting for. Its style is readable ... but it also has an authoritative tone." -- Silhouette: Air Seychelles in-flight magazine, January 1993 "This is a book everyone who has more than a passing interest in Seychelles will want to have." - George Bennett -- World Bibliographical Series: Volume 153 Seychelles, 1993 Synopsis When Major Delaunay and his party of French settlers and African slaves landed in Seychelles in August 1770 the only inhabitants were crocodiles, giant tortoises, and birds. What happened to these creatures and to the French settlers and their slaves in this Garden of Eden is described in William McAteer's first book of Seychelles history. The French held the Seychelles islands for only 40 years, but they forged a cultural identity which a century and a half of British rule has been unable to blur.

Buy Used
Condition: As New
An as new copy of the revised edition... Learn more about this copy

Book Description Pristine Books, Seychelles, 2002. Hard Cover. Condition: As New. Dust Jacket Condition: As New. Second Revised. An as new copy of the revised edition originally published in1991, there are no marks or inscriptions, binding is tight.The dustjacket is complete & not priceclipped, there are no nicks or tears.Photos supplied upon request. Seller Inventory # 01317