Items related to Spider King: A Biographical Novel of Louis XI of France

Spider King: A Biographical Novel of Louis XI of France 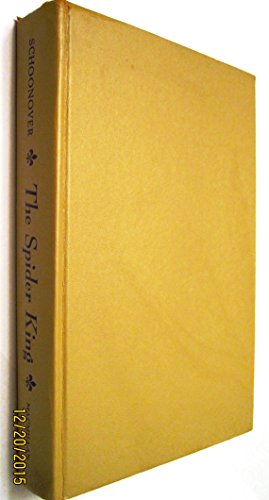 Louis XI of France was forced to struggle against odds that would have broken an ordinary man. Feared and hated by his father, opposed by the decadent nobility, driven by his own consuming ambition and cursed with a misshapen body that lodged a terrifying malady, Louis had good reason to despair, but this he never did. Instead he exhibited great and constant personal courage, sagacity and a fervent idealism which, in this violent era, the end of the Middle Ages, made him the herald of a new and better era, a glorious dawn that would be called the Renaissance.

Lawrence Schoonover, successful author of highly popular historical and biographical novels, passed away in 1983, but left a legacy of exceptionally readable and thoroughly researched works of great interest to lovers of history, adventure, and romance.Schoonover was born in Iowa and graduated from the University of Wisconsin before moving to New York to work for a large advertising agency. In the spring of 1948 he began research for what was later published as The Burnished Blade, the novel which immediately won him critical accolades and was chosen as a Literary Guild selection. This success allowed Schoonover to continue his writing. Many editions and millions of copies of his works have been printed and translated into eight languages including Spanish and Norwegian. Among his highly acclaimed works are The Spider King, a novel of King Louis XI who united France, The Queen s Cross about Ferdinand of Aragon and Isabella of Castile and their reconquest of Spain, and Gentle Infidel which tells the story of the son of a Venetian merchant who grows up to become a Turkish Janissary during the Turkish conquest of Constantinople.

1. Spider King: A Biographical Novel of Louis XI of France