Items related to All the Drowned Sailors

Raymond B Lech All the Drowned Sailors

All the Drowned Sailors 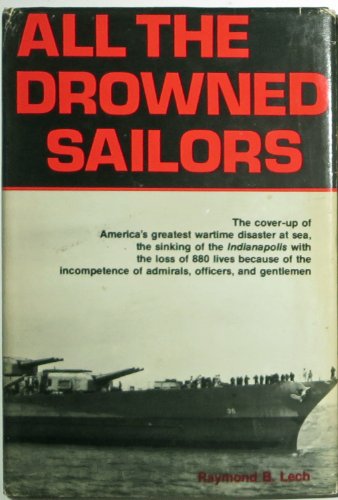 This is the story of a great wartime sea disaster and what really happened to the U.S.S. Indianapolis and her crew. Just 4 days after this flagship of the massive Pacific Fifth Fleet had delivered the components of the Hiroshima atomic bomb to the island of Tinian, she was torpedoed by a Japanese submarine and sank within 15 minutes. Why the Navy failed to rescue these brave sailors and why they began a massive coverup that lasted for over 30 years is the subject of this book, based upon previously unavailable files that reveal this startling conspiracy to conceal the massive blunders that were made.

All the Drowned Sailors

All The Drowned Sailors

Book Description Hardcover. Condition: Very Good+. Dust Jacket Condition: Very Good-. 1st Edition; 1st Printing. B&W Illustrations; This book is in Very Good+ condition and has a Very Good- dust jacket. The book and its contents are in generally clean, bright condition. The spine ends and corners of the book covers have some light bumping and rubbing. The text pages are clean and bright. There is a previous owner's inked name and date on the front endpaper. The dust jacket has several edge tears, nicks and rubbing to the edges. "In July 1945, Indianapolis completed a top-secret high-speed trip to deliver parts of Little Boy, the first nuclear weapon ever used in combat, to the United States Army Air Force Base on the island of Tinian, and subsequently departed for the Philippines on training duty. At 0015 on 30 July, the ship was torpedoed by the Imperial Japanese Navy submarine I-58, and sank in 12 minutes. Of 1,195 crewmen aboard, approximately 300 went down with the ship. " (from Wikipedia). Seller Inventory # A40252