Items related to A Child's Garden of Verses..... (Annotated) 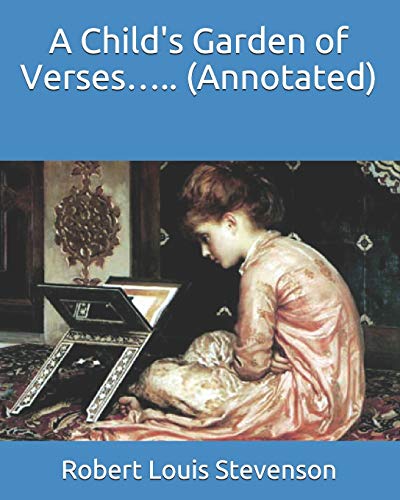 Book Description Paperback. Condition: New. Language: English. Brand new Book. Differentiated book- It has a historical context with research of the time-This book contains a historical context, where past events or the study and narration of these events are examined. The historical context refers to the circumstances and incidents surrounding an event. This context is formed by everything that, in some way, influences the event when it happens. A fact is always tied to its time: that is, to its characteristics. Therefore, when analyzing events that took place tens, hundreds or thousands of years ago, it is essential to know the historical context to understand them. Otherwise, we would be analyzing and judging what happened in a totally different era with a current perspective.A Child's Garden of Verses by Robert Louis Stevenson .is a collection of nursery rhymes by Scottish author Robert Louis Stevenson. The first chapter appeared in 1885 under the title Penny Whistles, it has been heavily republished and often in illustrated versions. It contained 65 poems such as "Foreign Children," "The Land of Counterpane," "Bed in Summer," "My Shadow" and "The Swing."Robert Louis Balfour Stevenson (Edinburgh, Scotland, November 13, 1850-Vailima, near Apia, Samoa, December 3, 1894) was a British novelist, poet and essayist. His legacy is a vast work that includes travel chronicles, Seller Inventory # APC9798736036783