Items related to AFTER I'M GONE: A Novel 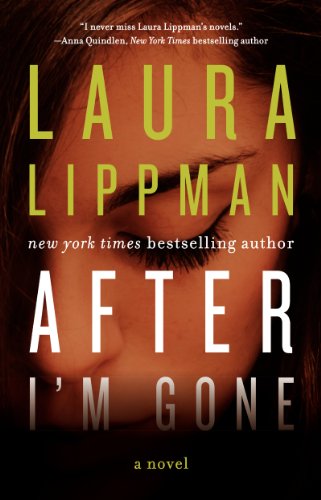 AFTER I'M GONE: A Novel

Title: AFTER I'M GONE: A Novel

Laura Lippman, the acclaimed New York Times bestselling author of The Most Dangerous Thing, I’d Know You Anywhere, and What the Dead Know, returns with an addictive story that explores how one man’s disappearance echoes through the lives of the wife, mistress, and daughters he left behind.

When Felix Brewer meets Bernadette “Bambi” Gottschalk at a Valentine’s Dance in 1959, he charms her with wild promises, some of which he actually keeps. Thanks to his lucrative—if not all legal—businesses, she and their three little girls live in luxury. But on the Fourth of July, 1976, Bambi’s comfortable world implodes when Felix, newly convicted and facing prison, mysteriously vanishes.

Though Bambi has no idea where her husband—or his money—might be, she suspects one woman does: his mistress, Julie. When Julie disappears ten years to the day that Felix went on the lam, everyone assumes she’s left to join her old lover—until her remains are eventually found.

Now, twenty-six years after Julie went missing, Roberto “Sandy” Sanchez, a retired Baltimore detective working cold cases for some extra cash, is investigating her murder. What he discovers is a tangled web stretching over three decades that connects five intriguing women. And at the center is the missing man Felix Brewer.

Somewhere between the secrets and lies connecting past and present, Sandy will find the truth. And when he does, no one will ever be the same.

Dennis Lehane is the author of ten novels—including the New York Times bestsellers Live by Night and Shutter Island.

Dennis Lehane: Place is elemental in our books. Talk about Baltimore and how it inspires your stories.

Laura Lippman: Baltimore is like an eccentric relative, that quirky uncle who you think is amazing when you’re a kid, and you love him so much. Then you grow up and you realize he’s unreliable and a drunk and maybe even a teeny bit racist – and you still love him so much. He’s your blood, your family. How do you work your head around that? Writing books was one way to do it..

DL: Who or what inspires your characters in After I'm Gone? Do you have a particular type of character that fascinates you?

LL: I let my husband give me an idea. Has there ever been truer proof of love? But he thought I was going to write about the real-life disappearance of Julius Salsbury, maybe even solve it. As the book proves, I was pretty uninterested in the man who disappeared even after creating my own version of him, Felix Brewer. I was fascinated by the women left behind. Harlan Coben said once that the stories about the missing are more haunting than the stories about the dead. It was a good observation. So I stole it.

DL:When it comes to process, I have all the discipline of an over-caffeinated flea in a puppy mill. But you’re quite regimented. Can you speak about the pros and cons of that approach?

LL: Anything that makes you comfortable is dangerous. And routine has always been my Prozac. Writers like me, we lean hard on that Flaubert chestnut. “Be regular and orderly in your life so you may be violent and original in your work.” But if you’re too orderly, too safe, how can you ever do something harder, deeper, stranger? Because there’s the other Flaubert quote, the one that our friend Sterling Watson taught me: “Human speech is like a cracked kettle on which we tap crude rhythms for bears to dance to, while we long to make music that will melt the stars.” I want to melt the stars and that goes beyond discipline. Sometimes, I feel like Veda in Mildred Pierce, when she goes to audition for a new piano teacher. He closes the lid on the keys, almost on her fingers, and tells her there’s nothing in her fingers, but there may be something in her head. I hope there’s something in my head to make up for what I don’t have in my fingers.

DL: I stopped writing about Kenzie and Gennaro when they simply stopped talking to me, can’t tell you why, can’t explain it any better than that. What about you and Tess Monaghan? Was there a moment—or a series of them—that led to you leaving that series behind?

LL: She had a baby. And I didn’t know what to do what that darn baby. I wrote The Girl in the Green Raincoat in 2008 when I was hoping to become a mom, but it was so theoretical and abstract. Then I became a mom in 2010 and talk about hardboiled – mud, blood, feces, urine, these endless logic problems. “If a person is traveling alone with a child and that person needs to go to the bathroom, yet the child has finally fallen asleep -- ”

But I need to give Tess a proper ending. I’ve gone back to her for my 2015 book, and I’m trying to build to something, perhaps an arc of 3 books in which I finally let her go. I always feel as if I’m standing between her and a happy life