Items related to AMBUSHED : A War Reporter's Year on the Front Lines 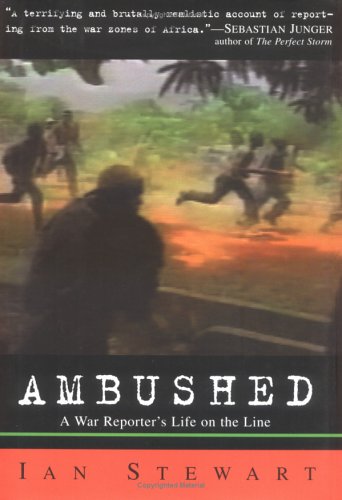 AMBUSHED : A War Reporter's Year on the Front Lines

Title: AMBUSHED : A War Reporter's Year on the ...

Ian Stewart has reported from some of the most dangerous places on earth, but none more dangerous than Sierra Leone. When he was named West Africa bureau chief by the Associated Press, Stewart accepted his new assignment with a mixture of excitement and trepidation. He was one of the AP's youngest bureau chiefs, and over the next year he reported from the front lines of the war-ravaged countries of the Congo, Guinea-Bissau, and Sierra Leone and coordinated news coverage of some twenty-three others.

AMBUSHED is a fascinating, in-depth look at the extraordinary day-to-day life of a war correspondent. Stewart presents a compelling portrait of the often surreal world that journalists inhabit as they bear witness to violence and give voice to the unspeakable. Appalled by the level of cruelty he witnessed, Stewart was shocked by the indifference of the outside world. Though his stories were sometimes buried deep inside the daily papers, or published not at all, he kept reporting the truth. When armed rebels entered Sierra Leone's besieged capital of Freetown, Stewart and two of his colleagues were ambushed while driving down the street on assignment. One of his colleagues was killed instantly, and Stewart, shot in the head, had a twenty-percent chance of surviving. Astonishingly, he did. With frankness and courage, Stewart tells the story of his extraordinary recovery and the tremendous risks he and other journalists take to give us the news.

A graduate of Columbia University's Graduate School of Journalism, Ian Stewart has reported from more than 40 countries. At the age of twenty-seven, he was appointed bureau chief of UPI's South Asia bureau. He later joined the Associated Press and was named bureau chief of its West Africa bureau in 1998. He lives in Berkeley, California.