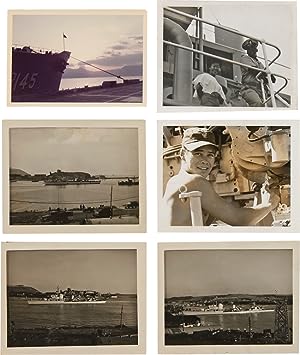 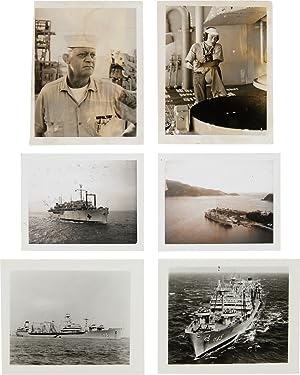 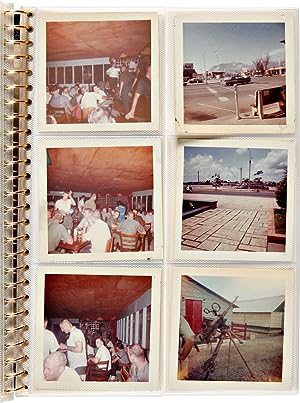 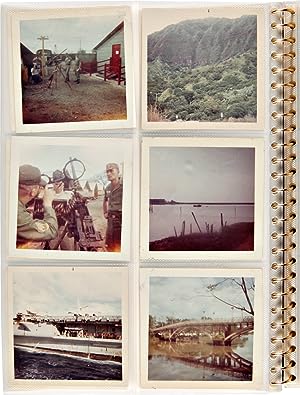 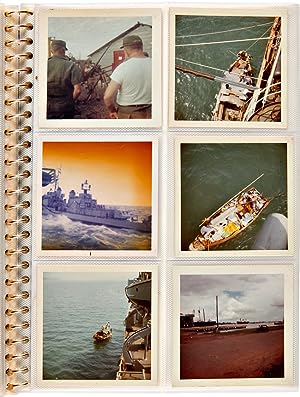 Eighty-seven photographs, most in color, most about 3 1/2 x 3 1/2 inches, including twelve slightly larger photographs laid in. Narrow quarto. Photograph album of black textured cloth, gilt label on front board. Photographs in generally nice condition. Very good. An interesting collection of color and black- and-white vernacular photographs taken by an unidentified Navy Midshipman or Marine serving in southeast Asia in the early years of American involvement in Vietnam. Twenty- four images are captioned on the verso, often identifying the time and place of the photographs, some of which were taken on ship and others on the ground. The majority of the photographs emanate from 1963, either from the caption or a date stamp in the margin of the photographs. They feature street scenes and various buildings in Hong Kong and Vietnam, views from the serviceman's ship, shots of servicemen gathered in the mess hall, views of fishing and various buildings in Pago Pago, and more. The captions provide a good cross-section of the nature of the photographs, a sampling of which read: "President Diems & Madame Nhus Palace being constructed - They were working on it when I came Feb 1963 August"; "Boulevard going towards Saigon August 63"; "Boats at river front Saigon August 63"; "Company Area V.T.T. Heli. Co. August 1963"; "Da Nang - S. Viet Nam"; "Chinese painting the ship - this is in Hong Kong"; "Bura boat alongside the ship selling goods in Hong Kong"; "One of the boats people live on in Hong Kong. Notice the laundry drying on the top"; "Governor's Home Pago Pago"; "Ships boat fishing party Pago Pago"; and others. The loose photographs feature naval subjects, such as the hospital ship U.S.S. Sanctuary, an officer named "Hamilton," and two shots of a young man onboard the ship who might be the compiler of the present album. A nice collection of early Vietnam War vernacular photography with useful annotations. Seller Inventory # WRCAM55578