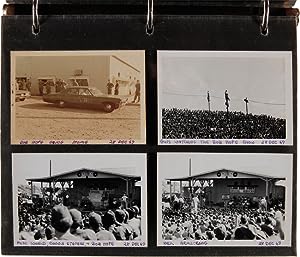 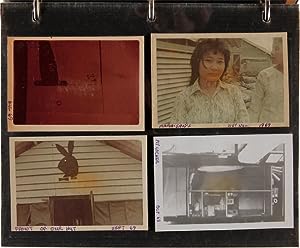 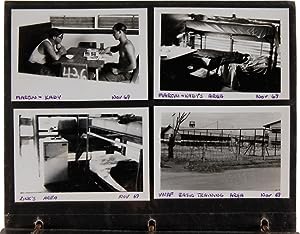 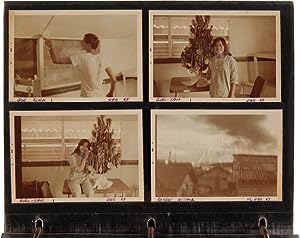 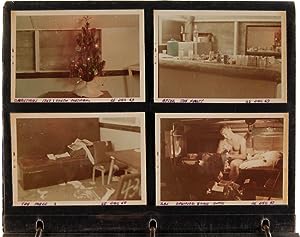 469 black-and-white or color photographs, measuring between 3 1/2 x 3 1/2 inches and 8 x 10 inches, either mounted or laid-in to acetate sleeves, almost all annotated in ink on the bottom margin or on the verso. Contemporary three-ring thick quarto-size binder, black cloth over boards. Joints partially split, some abrading and dust- soiling to covers. Slight fading to some of the color photos. Overall, very good. An exceptional vernacular photograph album by a talented but unknown amateur photographer recording a wide variety of experiences on American Air Force bases in South Vietnam and Asia during peak years of the Vietnam War. The photographer was likely a member of the motor pool or a mechanic, as the shots seem to center around truck, airplane, and helicopter maintenance. Most of the photographs capture scenes on or around the various bases, with shots both inside and outside of barracks, airplanes (including several shots of a U2 spy plane), bombed-out equipment, and numerous photos of the people and structures in the "Vietnamese Area." A few images capture distant shots of the aftermath of a "rocket attack" on December 12, 1969; shortly thereafter the photographer and his friends celebrate Christmas. Some of the more interesting photographs during the photographer's time in Vietnam include "VC Prisoners," "Group of Zips," "Papa-San Working His Rice Paddie," "Vietnamese Guard Tower," "Church on the West Side of Bięn Hňa," "Refueling at Phan Rang Run," "Bring the Wounded Out," and several pictures labeled "Buddha Hill" (likely the Long Son Pagoda in Nha Trang). Notably, and for no obvious reason, in two separate images the photographer snaps a picture in a magazine of the famous photograph of Thích Quang Duc, the monk who burned himself alive at a busy intersection in Saigon in 1963. Several times, the photographer takes a picture of another picture, an interesting practice in the context of so many original photographs. A handful of images of the photographer himself can be seen in the album. In a couple of shots, he is posed with his pet lizard. Later, he and his fellow soldiers adopt a pet monkey who features in several photographs. There are also a healthy amount of aerial images featuring the South Vietnamese landscape, notably rice fields, villages, rivers, "bomb craters," and cities, among other locations. Also, the photographer identifies dozens of fellow soldiers by name throughout the album, in both single portraits and in group photos. The album contains numerous shots (both black-and-white and in color) taken from the crowd and later on the runway during a December 28, 1969 U.S.O. show at Long Binh, with several images each of Bob Hope, Neil Armstrong, Connie Stevens, Suzanne Charny, Teresa Graves, Les Brown, the Golddiggers, and others. One photograph of Neil Armstrong is captioned "Biggest Hit of the Show." This is understandable given the fact that Armstrong landed on the moon just five months before this U.S.O. show. There is also an 8 x 10 photograph of Connie Stevens inscribed to "Ron," either the photographer's first name or an autographed picture he received from a friend. After the U.S.O. show, the photographer snaps several closer shots of Bob Hope, Connie Stevens, and others climbing into cars to leave. In April or May 1970, the photographer was shipped out to Osan Air Base in South Korea. Along the way, he spends a couple of days at Clark Air Base in Luzon in the Philippines where he snaps a few shots of the base. By early May, he has arrived at the Osan Air Base near Songtan Station in the city of Pyeongtaek, South Korea, just south of Seoul. He seems to be happy with his appointment at Osan; he captions one photograph "Home Sweet Home" and a few shots of the countryside as "Paradise." Here, he also photographs Korean farmers, their families, villages, a marketplace, a church, a school, and other landmarks. The final two images, dated in August 1970, show the photographer on an airboat on an unid. Seller Inventory # WRCAM55101