Items related to ART OF THE JEEP, THE: From Propaganda to Advertising

Home Hadacek, Je'rome ART OF THE JEEP, THE: From Propaganda to Advertising
Stock Image 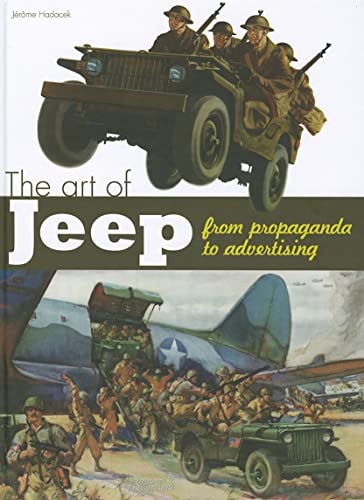 ART OF THE JEEP, THE: From Propaganda to Advertising

Title: ART OF THE JEEP, THE: From Propaganda to ...

The Jeep, despite its small engine and public underestimation, represents the most well known example of an American manufacturer’s success at making the transition from war propaganda to mainstream popular advertising.

Made famous by the appearance of a few articles, images of the Jeep could be found everywhere: on stationary, match boxes, playing cards, and appeared to invade America and then the world. The firm Willys further strengthened the phenomenon by inundating the press with large format color advertisements in order to compete with Bantam, the original maker of the engine. While the group was in reality too small to tackle both the demand of this project and the needs of their major client Ford, Willys was nevertheless able to dominate the publicity about the all terrain vehicle by devoting excellent illustrators to the job. Given the firm’s success, the image of the Jeep was thus highly exploited and used in other campaigns advertising the promotion of other products, personnel recruitment, as well as a variety of other items.

Organized by product, Hadacek’s work gathers together a superb collection of illustrations and material, retracing an entire period focused on a vehicle that initially went unnoticed but quickly became a major symbol of postwar ingenuity.

Jérome Hadacek is modeler specializing in 1/48 and 1/10 scale recreations. He is particularly fond of working on tanks and the jeep. He has published numerous articles in Steel Masters, Tank Zone and 4x4 Story, on various themes regarding military vehicles based off of reports from military museums throughout the world, technical documentation, and various related events.

The author, Jerome Hadacek is known for both his 1 / 48 and 1 / 10 scale models, and is passionate about tanks and jeeps. He has published extensively as a freelance writer on 4x4 vehicles.