Items related to Abarat Days of Magic, Nights of War 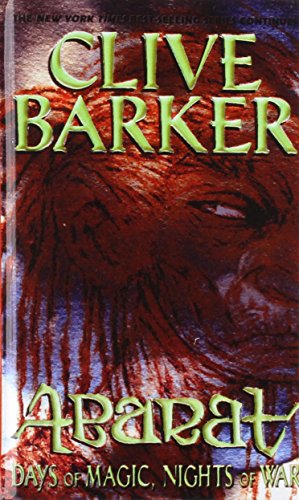 Candy Quackenbush's adventures in the amazing world of the Abarat are getting more strange by the hour. Christopher Carrion, the Lord of Midnight, has sent his henchman to capture her. Why? she wonders. What would Carrion want with a girl from Minnesota? And why is Candy beginning to feel that the world of Abarat is familiar to her? Why can she speak words of magic she doesn't even remember learning? There is a mystery here. And Carrion, along with his fiendish grandmother Mater Motley, suspects that whatever Candy is, she could spoil their plans to take control of the Abarat. Now Candy's companions must race against time to save her from the clutches of Carrion, and she must solve the mystery of her past before the forces of Night and Day clash and Absolute Midnight descends upon the islands. A final war is about to begin. And Candy is going to need to make some choices that will change her life forever ...

The eagerly anticipated second volume of Clive Barker’s four part fantasy series, Abarat: Days of Magic, Nights of War, picks up right where the highly praised first novel leaves off. Candy Quakenbush is still on the run from the Lord of Midnight, Christopher Carrion, who plans to establish a Permanent Midnight throughout the 25 islanads that make up Abarat. Candy, aided and abetted by a host of colorful new characters, including Malingo (the affable geshrat she rescued in Book One), continues to dodge Carrion’s hired assassins, as forces gather on both sides of Day and Night to prepare for the inevitable war between the Hours.

Days of Magic, Nights of War is a true series book--those who have not traveled to Abarat before will have a difficult time picking up the threads of Barker’s complex mythical opus without having read the first installment. But teen readers who have been waiting breathlessly for Candy’s return are rewarded with a stunning sequel that reveals her true identity at the novel’s smashing climax. As in Abarat, Clive Barker's full-colored, organic illustrations of Abarat’s inhabitants stalk and swim across the pages like a Stephen King-meets-Dr. Seuss circus. There seems to be no end to Barker’s ever-expanding idiosyncratic vision, and for that, fantasy fans of all ages can be grateful. --Jennifer Hubert