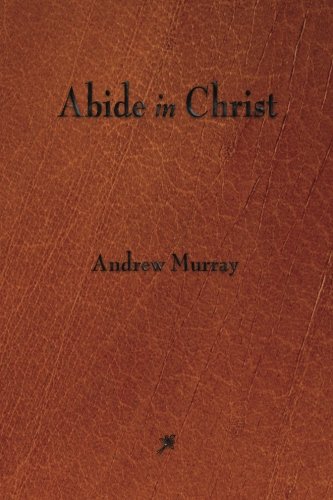 Synopsis: An Unabridged Edition, To Include, But Not Limited To: All You Who Have Come To Him - And You Shall Find Rest to Your Souls - Trusting Him to Keep You - As The Branch in the Vine - As You Came To Him, By Faith - God Himself Has United You to Him - As Your Wisdom - As Your Righteousness - As Your Sanctification - As Your Redemption - The Crucified One - God Himself Will Establish You - Every Moment - Day by Day - At This Moment - Forsaking All For Him - Through The Holy Spirit - In Stillness of Soul - In Affliction & Trial - That You May Bear Much Fruit - So Will You Have Power in Prayer - And In His Love - As Christ in the Father - Obeying His Commandments - That Your Joy May Be Full - And In Love to the Brethren - That You May Not Sin - As Your Strength - And Not In Self - As The Surety of the Covenant - The Glorified One

About the Author: Andrew Murray (1828–1917) was a South African writer, teacher, and Christian pastor. Murray considered missions to be "the chief end of the church." Andrew pastored churches in Bloemfontein, Worcester, Cape Town and Wellington, all in South Africa. He was a champion of the South African Revival of 1860. In 1889, he was one of the founders of the South African General Mission (SAGM), along with Martha Osborn and Spencer Walton. After Martha Osborn married George Howe, they formed the South East Africa General Mission (SEAGM) in 1891. SAGM and SEAGM merged in 1894. Because its ministry had spread into other African countries, the mission's name was changed to Africa Evangelical Fellowship (AEF) in 1965. AEF joined with SIM in 1998 and continues to this day. He died on January 18, 1917, four months before his eighty-ninth birthday. Over the years he has influenced many, including Jessie Penn-Lewis, a key figure in the 1904-1905 Welsh Revival.