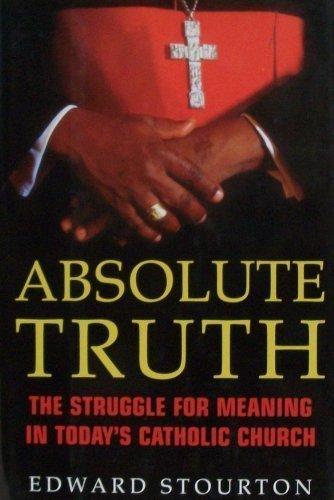 Synopsis: Edward Stourton’s ABSOLUTE TRUTH: THE STRUGGLE FOR MEANING IN TODAY’S CATHOLIC CHURCH (TV Books; January 2001) tells the story of a revolution in the world’s oldest and largest institutions. Stourton's examination covers the most hotly contested issues surrounding the Catholic Church today, as it is under fire by political and religious leaders for its age-old conservative views—birth control and abortion, liberation theology and communism, the male priesthood and celibacy, divorce and homosexuality, and even the very concept of Truth and belief in one God.

In this wonderfully compelling and definitive book, Stourton argues that the Second Vatican Council, almost 40 years ago, not only gave Catholicism the motivation and energy to meet the challenges of the modern world, but also unleashed dangerous forces that threaten the security of the Catholic Church in its third millennium.

About the Author: Edward Stourton presents the Today program on BBC Radio 4, and Correspondent, the BBC’s main foreign affairs television program, on BBC2. In 1997 he won the Sony Award for Best Radio News and Current Affairs program for the series Asia Gold. He produces current affairs documentaries for BBC television and radio, and contributes written journalism to national newspapers and magazines. Born in Lagos, Nigeria, Mr. Stourton has worked as a foreign correspondent based in Washington and Paris, and was Diplomatic Editor of Independent Television News. He lives in Wiltshire, England with his wife and three children.

Book Description TV Books, L.L.C. Hardcover. Condition: Very Good. A copy that has been read, but remains in excellent condition. Pages are intact and are not marred by notes or highlighting, but may contain a neat previous owner name. The spine remains undamaged. At ThriftBooks, our motto is: Read More, Spend Less. Seller Inventory # G1575001489I4N00

Book Description TV Books, 2000. Hardcover. Condition: Good. This is a used book in good condition and may show some signs of use or wear . Seller Inventory # mon0002881181

Book Description TV Books, 2000. Condition: Good. A+ Customer service! Satisfaction Guaranteed! Book is in Used-Good condition. Pages and cover are clean and intact. Used items may not include supplementary materials such as CDs or access codes. May show signs of minor shelf wear and contain limited notes and highlighting. Seller Inventory # 1575001489-2-4

9. Absolute Truth The Struggle For Meaning