Items related to Aces High: The War in the Air Over the Western Front...

Home Clark, Alan Aces High: The War in the Air Over the Western Front 1914-1918
Stock Image 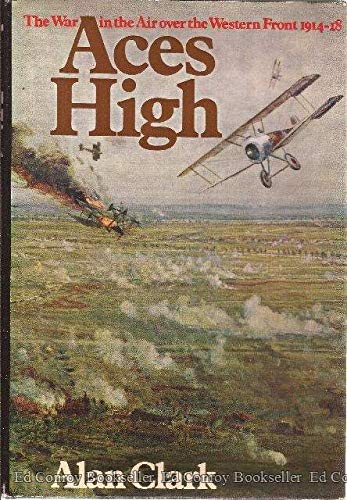 Fine in fine dust jacket. No prior owner markings, no bookplates, unread appearance. Jacket has no chips, no tears, and is not price-clipped. Excellent copy for a discriminating collector. Bookseller Inventory # 011693

Aces High serves to remind us that, if not an entirely scrupulous politician, nor a perfect husband, Alan Clark really was a superb military historian.

There has evolved something of a myth about the war in the air between 1914-1918. The myth goes that, while in the filth and gore of the trenches below any idealism and chivalry quickly sputtered and died, in the purer air above the last noble heroes battled in one-to-one dogfights like knights of old. It is a myth that Clark shoots down in flames, with characteristic iconoclasm.

One of the great RFC aces was Mick Mannock, famed for his encounter with a training instructor, out in a formation of six, with five of his very green-horned pupils. Mannock first shot down the instructor and then ruthlessly pursued each of the novices and shot them down one by one. This wasn't chivalry, it was war, and although more elegant to watch, it was every bit as lethal as Passchendaele.

Alan Clark, the noted historian, entered poilitics in 1972. He was Secretary of State in Margaret Thatcher's cabinet.

Aladdin Books has been selling fine books for over 30 years. Our showroom and warehouse is located about five miles north of Disneyland in Southern California. Visitors are welcome by appointment. Our specialties are magic and allied arts and cinema and television.

Items are guaranteed to be as described with regard to condition, edition, and authenticity or provenance. No other warranty is expressed or implied.


SALES TAX: The AbeBooks checkout system cannot detect when California sales tax must be added to your purchase price. As a bona fide California reseller, if we are shipping to a point within the state of California, we are required to collect state sales tax. After confirming availability, we will instruct AbeBooks to request your approval of the sales tax necessary based on the selling price of your purchase. SHIPPING CHARGES: Please note that about 13.5% of the shipping and handling charge is retained by AbeBooks as a fee levied against the bookseller and not passed along for purchasing postage and packaging supplies. That is much of the reason why the shipping charge is significantly higher than actual postage costs. This is especially true for international shipping where international postal costs are high to begin with. Occasionally (such as when ordering a set of books, it will be necessary for us to ask domestic buyers for some additional shipping funds. In this case, after confirming your book(s) is available, we will ask AbeBooks to request appropriate additional shipping charges. In practice, this is a rare occurrence on domestic orders. See below for international shipping. PACKING: All books will be carefully packed to insure safe arrival. We use either quality shipping boxes or other shipping containers augmented by bubble, paper cushioning, or cardboard chipboard to insure safe delivery in the same condition as book was sent. INTERNATIONAL ORDERS: Our default shipping cost is for shipping in a flat rate global priority envelope, small box, or flat rate bag. If your book is too large or too expensive to ship in these containers we will be asking AbeBooks to request adequate additional funds so we can ship your book safely and securely. All international shipments will be listed as books-merchandise on customs forms with value as actual invoice cost. No exceptions. If you have any concerns, please contact us via e mail prior to placing an order for an accurate shipping quotation.