Home Roumelia Lane Across the Lagoon 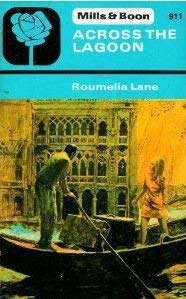 Book Description Paperback. Condition: Fair. A readable copy of the book which may include some defects such as highlighting and notes. Cover and pages may be creased and show discolouration. Seller Inventory # GOR000867996

Book Description Paperback. Condition: Very Good. The book has been read, but is in excellent condition. Pages are intact and not marred by notes or highlighting. The spine remains undamaged. Seller Inventory # GOR004001950

Book Description Paperback. Condition: Good. The book has been read but remains in clean condition. All pages are intact and the cover is intact. Some minor wear to the spine. Seller Inventory # GOR001957284

Book Description Harlequin, 1974. Condition: Good. New Ed. Ships from the UK. Shows some signs of wear, and may have some markings on the inside. Seller Inventory # GRP111033515

Book Description Harlequin, 1974. Condition: Good. New Ed. Ships from the UK. Former Library book. Shows some signs of wear, and may have some markings on the inside. Seller Inventory # GRP116828792

Book Description Mills & Boon, London, 1974. Mass Market Paperback. Condition: Good. First Thus. 192 pages. 100 grams. Book is in good condition with some age toning of pages. Mills & Boon number 911. 'Carol Lindley had never been abroad in her life, so she was thrilled when she managed to land a job which would mean spending the whole summer, in luxurious surroundings, on the Venice Lido. She was sure she could cope with it - all she had to do was act as companion to the teenage Stephanie. But it wasn't, alas, going to be as easy as that! Stephanie turned out to be more than a handful, keeping Carol at her wits' end with her wild exploits - and somehow always managing to involve Carol in them as well! But even Stephanie was easier to deal with than her grim uncle, Gray Barrett, who was convinced that the whole thing was Carol's fault. Why did his opinion of her matter so much?' 12mo - over 6Â¾" - 7Â¾" tall. Quantity Available: 1. Category: Romance; ISBN: 026371666X. ISBN/EAN: 9780263716665. Pictures of this item not already displayed here available upon request. Inventory No: 004037. Seller Inventory # 004037

Shipping: US$ 20.00
From Australia to U.S.A.
Destination, rates & speeds
#renderBDPScripts()