Items related to Acts of Courage: Register of the George Medal 1940-2015 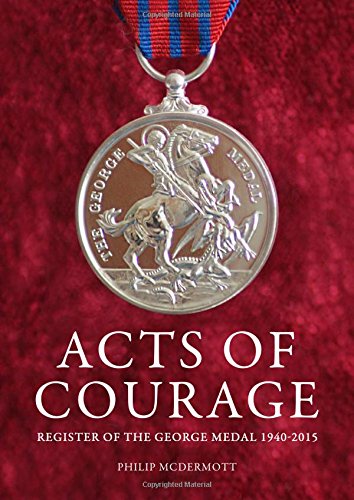 Title: Acts of Courage: Register of the George ...

The George Medal, along with the George Cross, was instituted by His Majesty King George VI on 24th September 1940. His desire, that the many acts of bravery being performed on home soil, in a type of warfare never experienced before, and primarily by civilians for whom military awards were inappropriate, was the driving force behind their creation.The medal has been awarded to civilians and military personnel over the past 75 years, all of whose names are contained within this register.Never before has a register of the George Medal been produced that presents the information behind the awards. It stands as a testament to the selfless acts performed by the men and women within its pages.

Phil was born in Birmingham and grew up in a working-class environment typical of the area. His parents worked at the Austin, later British Leyland, and Cadburys, typical of so many families where he was raised. His lifelong interest in medals started at the age of nine with a rare trip out of the UK to Jersey where, with his father, he found a shop selling coins and medals. Phil was struck by the colours of three medal ribbons in the window, but they were 30 shillings and too expensive. On return home he visited the local library and began reading everything he could on the subject.In 1988 he started mounting medals and subsequently formed Worcestershire Medal Service with his first wife, to help support his new family. In 1986 he had started work on his first book For Distinguished Conduct in The Field and had been appointed Archivist of the Distinguished Cobduct Medal League. That book was followed by For Conspicuous Gallantry. Today his company is the UK's largest dedicated to the production and mounting of medals, and manufactures State Honours not only for the UK but a number of countries around the world. He has also worked closely with departments of the UK government on various projects, most notably the Elizabeth Cross.Thirty years after starting, he is still Archivist of The Gallantry Medallists' League, the present-day name of the DCM League, which now encompasses all holders of Level Two awards.Phil lives with his wife Jenny close to the town of Bromsgrove, which has been the home of his business since it was founded. He has there children Kerry, Katharyn and Jack.