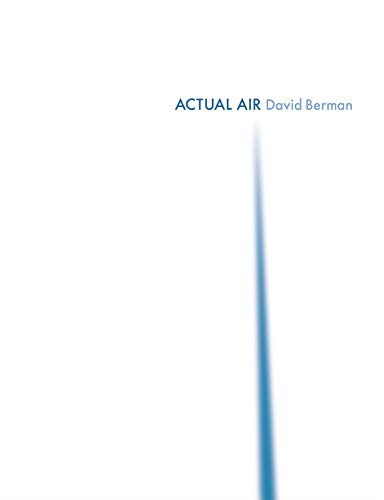 AbeBooks Seller Since May 26, 2003 Seller Rating

Released in paperback in 1999 by the now-defunct Open City and praised everywhere in the then-ascendant print press industry (including names that still make waves today like The New Yorker and GQ), David Berman’s first (and only) book of poetry was and is a journey though shared and unreliable memory. Uncannily inspired, Berman’s poems walk through doors into rooms where where one might hear “I can’t remember being born / and no one else can either / even the doctor who I met years later / at a cocktail party” (from “Self-Portrait at 28”), or praise “the interval called hangover / a sadness not co-terminous with hopelessness” (from “Cassette Country”) and “that moment when you take off your sunglasses / after a long drive and realize it’s earlier / and lighter out than you had accounted for” (“The Charm of 5:30”). At that time, Berman was called a modern-day Wallace Stevens and a next-wave John Ashberry, with his own logic, awareness of pop culture and sensitivity to the details of the post-postmodern world in his poems. Alongside his lyrics to a half-dozen infamous Silver Jews records, Actual Air endeared Berman to lovers of poetry, prose, and music alike. Poet James Tate said it best: “It is a book for everyone.” And poet laureate Billy Collins could only add, “This is the voice I’ve waited so long to hear.” The second edition of the hardcover version of Actual Air is limited to 1000 copies. Features of the second edition are: new larger dimensions and enlarged typeface, new dustjacket artwork variant, deluxe cloth boards, updated full-color endpapers, dust-jacket featuring a photo of the artist around the time of publication, and of course the poems that inspired all this fuss in the first place.

"David Berman's poems are beautiful, strange, intelligent, and funny. They are narratives that freeze life in impossible contortions. They take the familiar and make it new, so new the reader is stunned and will not soon forget. I found much to savor on every page of Actual Air. It's a book for everyone."-James Tate

Moe's Books has been selling new, used, and antiquarian books for over fifty years. Our store has four floors, a separate rare book room, and over 300,000 books. We are located in the heart of Berkeley, four blocks from the University of California campus on historic Telegraph Avenue. Please check out website for more information about the store and our event information. We have many of our readings available as free audio downloads. You can also contact us with want lists or questions about our inventory.


Books may be returned only if not as described.


Orders usually ship within 2 business days. Shipping costs are based on books weighing 2.2 LB, or 1 KG. If your book order is heavy or over-sized, we may contact you to let you know that extra shipping is required. International shipping rates are based on the book being able to be shipped via Global Priority. Over-sized or heavy books to be shipped by air mail will require additional postage. Additional postage is quoted at cost.