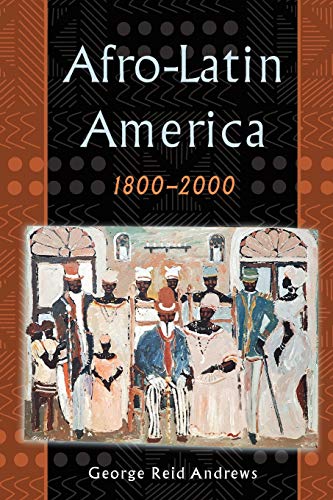 Synopsis: While the rise and abolition of slavery and ongoing race relations are central themes of the history of the United States, the African diaspora actually had a far greater impact on Latin and Central America. More than ten times as many Africans came to Spanish and Portuguese America as the United States.

In this, the first history of the African diaspora in Latin America from emancipation to the present, George Reid Andrews deftly synthesizes the history of people of African descent in every Latin American country from Mexico and the Caribbean to Argentina. He examines how African peooples and their descendants made their way from slavery to freedom and how they helped shape and responded to political, economic, and cultural changes in their societies. Individually and collectively they pursued the goals of freedom, equality, and citizenship through military service, political parties, civic organizations, labor unions, religious activity, and other avenues.

Spanning two centuries, this tour de force should be read by anyone interested in Latin American history, the history of slavery, and the African diaspora, as well as the future of Latin America.

About the Author:
George Reid Andrews is UCIS Research Professor of History at the University of Pittsburgh. He is the author of The Afro-Argentines of Buenos Aires, 1800-1900 and Blacks and Whites in São Paulo, Brazil, 1888-1988.

Book Description Paperback. Condition: Good. Highlighting to some pages. Good condition is defined as: a copy that has been read but remains in clean condition. All of the pages are intact and the cover is intact and the spine may show signs of wear. The book may have minor markings which are not specifically mentioned. Most items will be dispatched the same or the next working day. Seller Inventory # mon0016434545

Book Description Condition: Good. A+ Customer service! Satisfaction Guaranteed! Book is in Used-Good condition. Pages and cover are clean and intact. Used items may not include supplementary materials such as CDs or access codes. May show signs of minor shelf wear and contain limited notes and highlighting. Seller Inventory # 0195152336-2-4

Book Description Paperback. Condition: Good. 1st Edition. Ships in a BOX from Central Missouri! May not include working access code. Will not include dust jacket. Has used sticker(s) and some writing or highlighting. UPS shipping for most packages, (Priority Mail for AK/HI/APO/PO Boxes). Seller Inventory # 000659530U