Home Giles MacDonogh After the Reich 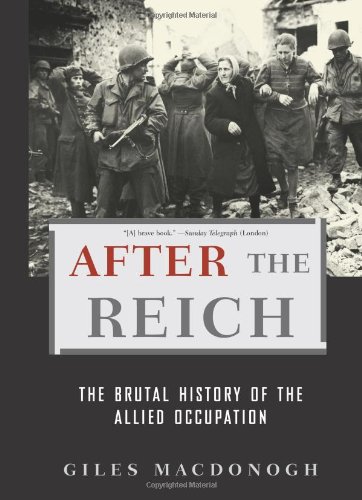 A stated first edition, with a full number line. Hard to tell from new. DJ has minor rubbing. We put tracking on every shipment. Bookseller Inventory # 33895

Synopsis: When the Third Reich collapsed in 1945, the Allied powers converged on Germany and divided it into four zones of occupation. A nation in tatters, in many places literally flattened by bombs, was suddenly subjected to brutal occupation by vengeful victors. Rape was rampant. Hundreds of thousands of Germans and German-speakers died in the course of brutal deportations from Eastern Europe. By the end of the year, Germany was literally starving to death. Over a million German prisoners of war died in captivity, where they were subjected to inadequate rations and often tortured. All told, an astounding 2.25 million German civilians died violent deaths in the period between the liberation of Vienna and the Berlin airlift. A shocking account of a massive and vicious military occupation, After the Reich offers a bold reframing of the history of World War II and its aftermath. Historian Giles MacDonogh has unearthed a record of brutality which has been largely ignored by historians or, worse, justified as legitimate retaliation for the horror of the Holocaust. Drawing on a vast array of contemporary firstperson accounts, MacDonogh has finally given a voice to tens of millions of civilians who, lucky to survive the war, found themselves struggling to survive a hellish peace.

About the Author: Giles MacDonogh is the author of several books on German history, including The Last Kaiser: A Life of Wilhelm II and Frederick the Great as well as histories of Berlin and Prussia. A graduate of Oxford University, MacDonogh has written for the Financial Times, the Times (London), the Guardian, and the Evening Standard. He lives in London with his family.

1. After the Reich The Brutal History of the Allied Occupation

2. After the Reich: Brutal History of the Allied Occupation.

4. After the Reich: The Brutal History of the Allied Occupation