Items related to The Age of Discontinuity: Guidelines to Our Changing... 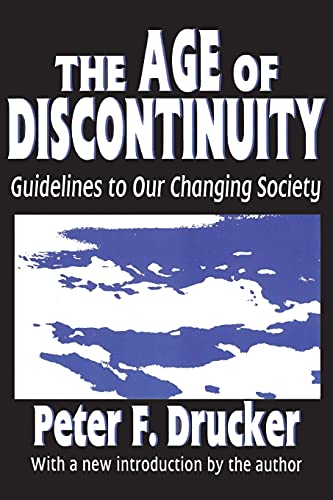 The Age of Discontinuity: Guidelines to Our Changing Society

Title: The Age of Discontinuity: Guidelines to Our ...

The closing decades of the twentieth century have been characterized as a period of disruption and discontinuity in which the structure and meaning of economy, polity, and society have been radically altered. In this volume Peter Drucker focuses with great clarity and perception on the forces of change that are transforming the economic landscape and creating tomorrow's society.

Drucker discerns four major areas of discontinuity underlying contemporary social and cultural reality. These are: (1) the explosion of new technologies resulting in major new industries; (2) the change from an international to a world economy—an economy that presently lacks policy, theory, and institutions; (3) a new sociopolitical reality of pluralistic institutions that poses drastic political, philosophical, and spritual challenges; and (4) the new universe of knowledge based on mass education and its implications in work, leisure, and leadership.

Peter Drucker brings to this work an intimate knowledge and objective view of the particular and general. The Age of Discontinuity is a fascinating and important blueprint for shaping a future already very much with us.

Peter F. Drucker (1909-2005) is known by many as the father of modern management. He was Clarke Professor of Social Science and Management at Claremont Graduate School in California and was a recipient of the Presidential Medal of Freedom. He is the author of over thirty-five books, including The Ecological Vision, The Concept of the Corporation, and A Functioning Society.