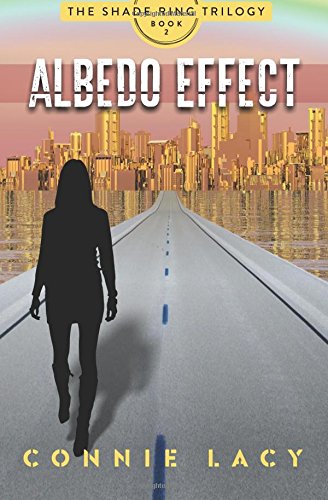 Synopsis: Threats from a power-hungry father. Rejection by the man she loves. An increasingly violent Mother Nature. And political upheaval over runaway global warming.
Neave Alvarez faces danger on all fronts in Albedo Effect, Book 2 of The Shade Ring Trilogy.

She's shocked that her father, the disgraced former Climate Secretary, has been extradited to China and won't face charges for two likely murders or fraud against his own country. And when it becomes obvious he'll stop at nothing to prevent her from marrying "a subhuman clone," she realizes she must fight back.

Set a hundred years in the future when sea levels have risen fifteen feet, Albedo Effect is about a gutsy young woman trying to navigate escalating political turmoil over a plan to shade the Earth from the sun. This, as she struggles to protect the only man who's ever accelerated her electrons from her cold-blooded father.

About the Author: Connie Lacy worked for many years as a radio reporter and news anchor, after dabbling in acting in college and community theater. Those experiences show up in some of her novels.

Her passion for human rights prompted her to write "A Daffodil for Angie," a historical novel set in the 1960s. Her interest in climate change led her to imagine a not-too-distant future when oceans have risen fifteen feet. That's the backdrop for "The Shade Ring Trilogy." And her fascination with time travel and the paranormal are on display in "The Time Telephone" and "VisionSight: a Novel."

Growing up, she lived in Japan and Okinawa where her Army dad was stationed. She graduated from the University of North Carolina at Pembroke with a degree in Journalism and Creative Writing. She and her husband live in Atlanta.

Book Description CreateSpace Independent Publishing Platform. Paperback. Condition: Very Good. A copy that has been read, but remains in excellent condition. Pages are intact and are not marred by notes or highlighting, but may contain a neat previous owner name. The spine remains undamaged. An ex-library book and may have standard library stamps and/or stickers. At ThriftBooks, our motto is: Read More, Spend Less. Seller Inventory # G1537114662I4N10

Book Description CreateSpace Independent Publishing Platform, 2016. Condition: Good. 1st Edition. Shows some signs of wear, and may have some markings on the inside. Seller Inventory # GRP112369554