Items related to Algerian Diary: Frank Kearns and the "Impossible... 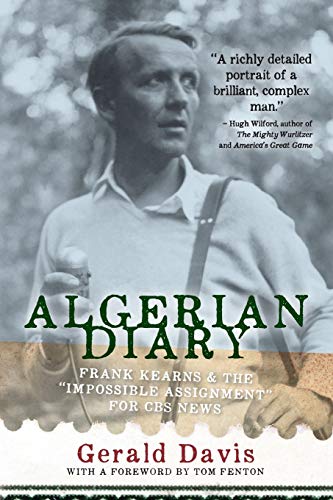 Edition: 1st Edition - may be Reissue.

Frank Kearns was the go-to guy at CBS News for danger- ous stories in Africa and the Middle East in the 1950s, ‘60s, and early ‘70s. By his own account, he was nearly killed 114 times. He took stories that nobody else wanted to cover and was challenged to get them on the air when nobody cared about this part of the world. But his stories were warning shots for conflicts that play out in the headlines today.

In 1957, Senator John Kennedy described America’s view of the Algerian war for independence as the Eisenhower Administration’s “head in the sand policy.” So CBS News decided to find out what was really happening there and to determine where Algeria’s war for independence fit into the game plan for the Cold War. They sent Frank Kearns to find out.

Kearns took with him cameraman Yousef (“Joe”) Masraff and 400 pounds of gear, some of which they shed, and they hiked with FLN escorts from Tunisia, across a wide “no-man’s land,” and into the Aures Mountains of eastern Algeria, where the war was bloodiest. They carried no passports or visas. They dressed as Algerians. They refused to bear weapons. And they knew that if captured, they would be executed and left in unmarked graves. But their job as journalists was to seek the truth whatever it might turn out to be.

This is Frank Kearns’s diary.

Gerald Davis is the producer, writer, and director of Frank Kearns: American Correspondent, a one-hour documentary film developed by Greenbriar Group Films in association with West Virginia Public Broadcasting. A native of Elkins, West Virginia, Davis earned undergraduate and graduate degrees from the P. I. Reed School of Journalism at West Virginia University, where he was a student of Frank Kearns.