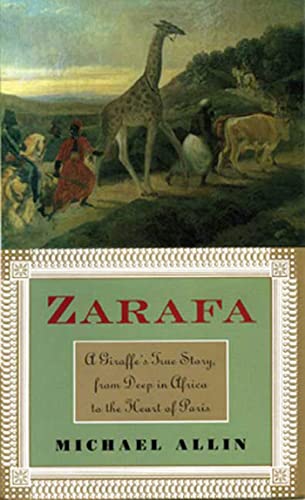 Signed by author on the title page. This is the first printing of the first edition. In great shape. Bookseller Inventory # 004844

In October 1826, a ship arrived at Marseille carrying the first giraffe ever seen in France. A royal offering from Muhammad Ali, Ottoman Viceroy of Egypt, to King Charles X, she had already traveled 2,000 miles down the Nile to Alexandria, from where she had sailed across the Mediterranean standing in the hold, her long neck and head protruding through a hole cut in the deck. In the spring of 1827, after wintering in Marseille, she was carefully walked 550 miles to Paris to the delight of thousands of onlookers.

The viceroy's tribute was politically motivated: He commanded the Turkish forces then fighting the Greeks in their war of independence, and hoped his gift would persuade the French not to intervene against him. But the viceroy and his intentions were quickly forgotten as France fell in love with its "beautiful stranger."
Zarafa chronicles the full story of this remarkable animal, revealing a kaleidoscope of history, science, and culture that opens an exotic window on the early nineteenth century. From the Enlightenment's blossoming fascination with science to Napoleon's ill-fated invasion of Egypt in 1798–from the eminent French naturalist Étienne Geoffroy Saint-Hilaire to Bernardino Drovetti, French consul general in Egypt and tomb robber extraordinaire–the era was full of memorable events and characters. Michael Allin deftly weaves them into the story with an appreciation for detail and an uncommon affection.

The giraffe's strange and wonderful journey linked Africa and Europe in mutual discovery. Although her arrival did not keep the French out of Ali's war, she became an instant celebrity in Paris and over the next eighteen years she fascinated all of Europe. Through Michael Allin's narrative skill, Zarafa stirs the imagination as it provides a new context for the history of a distant age.

Zarafa was a gentle 19th-century giraffe, a simple animal whose life was dictated by the tumultuous times around her. From the African savanna where she was caught and tamed as an infant, Zarafa was shipped down the Nile--along with the meat of her mother and several hundred human slaves--to the shores of the Mediterranean Sea. From there she sailed on to France, a gift from Muhammad Ali, the "Renaissance Barbarian" viceroy of Egypt, intended to distract King Charles X while Egyptian forces invaded Greece. As political ploy, it didn't work. But as ambassador from an exotic land, this odd animal captivated the French people for almost two decades, as she lived out her life as part of the royal menagerie.

Michael Allin intertwines natural history with a brutal chapter in the history of civilization, augmenting the clarity of both. This story of one docile animal contrasts sharply with those of the human profiteers, warmongers, and interlopers who ultimately decide her fate. But Zarafa's otherworldly charm also helps us to understand the intrigue that led Napoleon to bring not only his troops, but a small army of European intellectuals to study all aspects of Egyptian culture and history, in the invasion that sets up her story. --Lauran Cole Warner