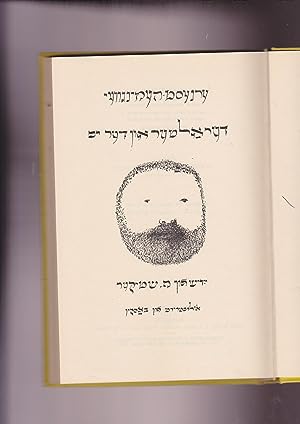 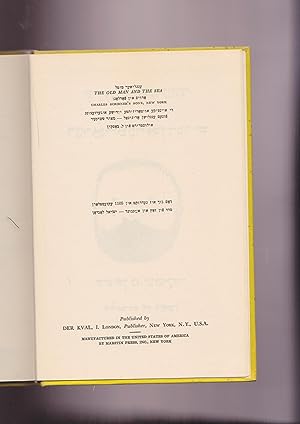 We're sorry; this specific copy is no longer available. Here are our closest matches for Der Alter un Der Yam (the Old Man and the Sea - Yiddish) by Hemingway, Ernest.

Limited edition of 1105 copies, Yiddish language. Yellow cloth boards with a drawing of Hemingway on the front panel, in glassine wraps, black and white drawing by Leonard Baskin In Yiddish. Seller Inventory # 005213

Book Description Hardcover. Condition: Very Good. Baskin, Leonard (illustrator). 1st Edition in Yiddish. In Yiddish. 135pp. Ltd ed of 1105 copies. 6x9 inches. Yellow cloth boards with drawing of Hemingway on front panel. Black and white drawing by Leonard Baskin. The Molly Picon - Kalish copy. MOLLY PICON diminutive superstar of Yiddish stage and screen (New York City, Feb 28 or June 1, 1898 - Lancaster, PA, April 5, 1992). In her 80 year as entertainer, she had great impact on Jewish culture in Europe, Israel and the USA. Until she her 40s, her persona was an adorable but streetwise waif of twelve, often dressed as a boy, capable of executing headstands, somersaults, cartwheels, and flying stunts while singing, dancing, and playing all sorts of musical instruments. Most of Picon?s vehicles were written, produced, and directed by her husband, Jacob Kalich, who sometimes performed as well. She was born Ma?ka (Margaret) Opiekun on New York?s Lower East Side; her father was a charming but feckless tradesman from Warsaw, and her mother, from Kiev, worked as a seamstress. When Molly?s younger sister Helen was born, her father left home. Her mother took the two girls and her own mother to Philadelphia and supported them all as a theatrical costumer. Molly was performing from the age of five, when she won five dollars at a talent contest (and collected two more dollars singing for the trolley passengers on the way there). She spent many nights of her youth and adolescence doing song-and-dance routines in theaters. She couldn't juggle school and the theater and left high school at 16. A touring vaudeville troupe "The Four Seasons" took Molly Picon on the road in the part of ?Winter.? At the height of the influenza epidemic, the troupe found itself in Boston where all the vaudeville houses had been shuttered for fear of contagion. Only the Boston Grand Opera House remained available. Its manager was Jacob Kalich ? ?Yonkel? ?, a cultivated Polish immigrant who had quit rabbinical school for a career in the theatre; he and Molly married in June 1919, she in a dress made by her mother from a stage curtain. In 1920 Molly was delivered of a stillborn baby girl and was told she could never bear children. In post-World-War-II years, however, the couple more than satisfied their longing by foster-parenting four adolescent children in Europe and Israel. Yonkel determined that they should go on tour to Europe, to absorb Yiddish culture and to improve Molly?s accent, which inauthentic. In Vienna she made several films: her first, Das Judenmadel (The Jewish Girl 1921) is now lost; Ost und West (East and West 1923), in which Picon plays a feisty American kid (in boxing gloves) with no respect for old European ways, is the first Yiddish (though silent) film to have survived. The couple played in Kishnev, Lemberg, Jassy, Bucharest, London, and Paris, presenting Molly almost always as a cross-dressing tomboy. When they returned to New York in the late ?20s, they moved into the Second Avenue Theatre with Yonkele (?Little Yonkel?), Tzipke, Shmendrik (?Loser?), Gypsy Girl, Molly Dolly, Little Devil, Raizele, Oy is Dus A Madel (?What a Girl!?), and The Circus Girl. Business boomed and they bought a house in Mahopac, NY, which they dubbed ?Chez Schmendrik.? Kalich put all their money in the stock market and lost most of it in the 1929 crash. But an opportunity arose to buy the Second Avenue Theatre in 1930; he renamed it the Molly Picon Theatre and soon recouped all his losses. Picon and Kalich returned to Europe in the late ?30s, just when anti-Semitism was on its rise, to make the musical Yidl Mit?n Fidl (1937) under Joseph Green in Warsaw. She was paid a record sum of $10,000 playing a twelve-year-old girl who dresses as a boy so that she can travel unmolested with a band of musicians. Mamele (1938), another musical Picon romp, was the last Jewish film to be made in Poland. Picon made her Broadway debut in 1940 with 63 performances of Morning Star. In it she spoke in English and played a matronly woman. . . . . Seller Inventory # 007691

2. Der Alter un der Yam (The Old Man and the Sea in Yiddish)