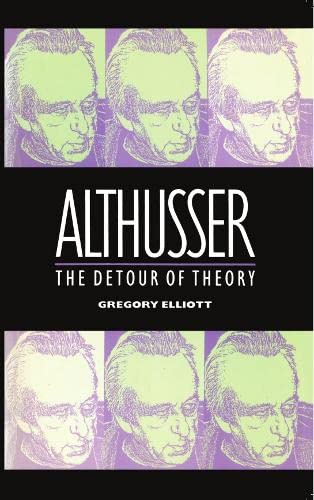 Althusser: The Detour of Theory

Synopsis: First published in 1987, Althusser, The Detour of Theory was widely received as the fullest account of its subject to date. Drawing on a wide range of hitherto untranslated material, it examined the political and intellectual contexts of Althusser's 'return to Marx' in the mid-1960s; analysed the novel character of the Marxism developed in his major works; charted their author's subsequent evolution, from his self-criticism to the proclamation of a 'crisis of Marxism'; and concluded with a balance-sheet of Althusser's contribution to historical materialism. For this second edition, Gregory Elliott has added a substantial postscript in which he surveys the posthumous edition of the French philosopher's work published in the 1990s, from the early writings of the 1940s through to the late texts of the 1980s, relating the unknown Althusser revealed by them to the familiar figure of For Marx and Reading Capital, together with a comprehensive bibliography of Althusser's oeuvre.

About the Author: Gregory Elliott was educated at Balliol College, Oxford, where he completed his D.Phil. on Louis Althusser in 1985. An independent translator and writer, his books include Perry Anderson: The Merciless Laboratory of History (1998). His most recent translation is Luc Boltanski and Eve Chiapello's The New Spirit of Capitalism(2006).

1. Althusser. The Detour of Theory

Book Description Paperback. Condition: Very Good. The book has been read, but is in excellent condition. Pages are intact and not marred by notes or highlighting. The spine remains undamaged. Seller Inventory # GOR004459212

5. Althusser: The Detour of Theory

Book Description Verso Books, 1989. Paperback. Condition: Good. Connecting readers with great books since 1972. Used books may not include companion materials, some shelf wear, may contain highlighting/notes, may not include cdrom or access codes. Customer service is our top priority!. Seller Inventory # S_274906251