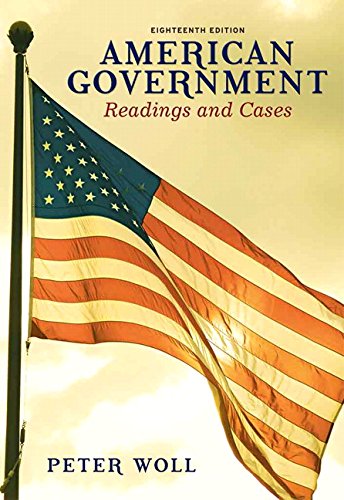 Synopsis: With an even stronger focus on the U.S. Constitution in the post 9/11 world, the Eighteenth Edition of this best-selling reader in American government puts students directly in touch with the great authors and political leaders who have shaped€”and are shaping€”American government. The bestselling American government reader for over 40 years, this anthology continues to provide a strong, balanced blend of classic selections that illustrate and amplify important concepts in American government, along with current readings and cases drawn from today's headlines.

New to this Edition:

This new edition provides new content on both historic context and modern examples of the reading of the Constitution.

Book Description Pearson, 2009. Condition: Fair. PAPERBACK. COMPONENTS ARE NOT INCLUDED. Heavy wear and creasing to cover/edges/corners. Layers of covers on corners are moderately split. Rips and tears to cover and pages. Binding solidly attached to cover but may show signs of loosening. Binding still holding strong. All pages present. School markings/highlighting throughout book and black-out marks on edges of pages, but none that impairs usability. WE HAVE NUMEROUS COPIES. Seller Inventory # G0205697984004

Book Description Pearson, 2009. Paperback. Condition: GOOD. Has little wear to the cover and pages. Contains some markings such as highlighting and writing. Supplemental materials are not guaranteed with any used book purchases. Seller Inventory # 0205697984_abe_gd

Book Description Pearson, 2009. Condition: Good. A+ Customer service! Satisfaction Guaranteed! Book is in Used-Good condition. Pages and cover are clean and intact. Used items may not include supplementary materials such as CDs or access codes. May show signs of minor shelf wear and contain limited notes and highlighting. Seller Inventory # 0205697984-2-4