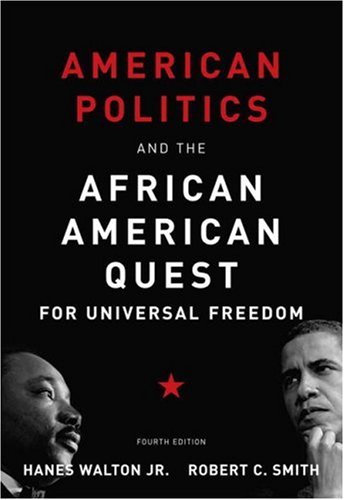 This dynamic and comprehensive text from two nationally renowned scholars continues to demonstrate the profound influence African Americans have had -- and continue to have -- on American politics.

Through the use of two interrelated themes–the idea of universal freedom and the concept of minority-majority coalitions–the text demonstrates how the presence of Africans in the United States affected the founding of the Republic and its political institutions and processes.  The authors show that through the quest for their own freedom in the United States, African Americans have universalized and expanded the freedoms for all Americans.

New to this Edition:

Faces and Voices of the Struggle boxed feature appearing in most chapters highlights Americans - black and white, famous and obscure - who affected the foundations of our nation and helped to universalize the quest for freedom.  Examples include Eleanor Roosevelt, Harry Belafonte, John Mercer Langston, and Barack Obama.

This open-access site contains a variety of tools to help students become engaged in the ongoing quest for universal freedom. It includes links to primary sources, African American elected officials, media, think tanks, scholarly associations and interest groups.  The “In The News” section is updated regularly with ongoing issues that relate to topics in the book.

Book Description Pearson 2007-07-26, 2007. Paperback. Condition: Good. Item is in good condition. Some moderate creases and wear. This item may not come with CDs or additional parts including access codes for textbooks. Might be an ex-library copy and contain writing/highlighting. Photos are stock pictures and not of the actual item. Seller Inventory # DS-0205536395-3

3. American Politics and the African American Quest for Universal Freedom

Book Description Pearson, 2007. Condition: Good. A+ Customer service! Satisfaction Guaranteed! Book is in Used-Good condition. Pages and cover are clean and intact. Used items may not include supplementary materials such as CDs or access codes. May show signs of minor shelf wear and contain limited notes and highlighting. Seller Inventory # 0205536395-2-4