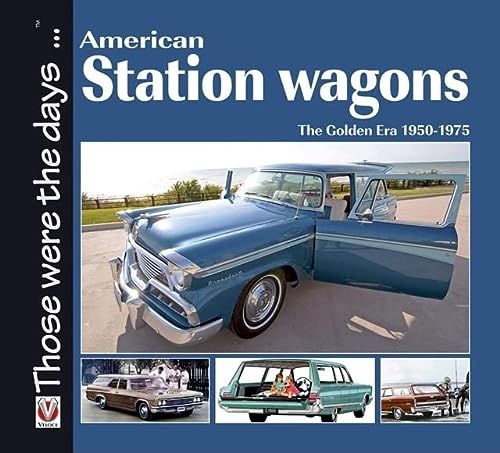 Synopsis: American Station Wagons The Golden Era 1950-1975 examines the important quarter century period when the American station wagon was a family standard and status symbol of a successful suburban lifestyle. With 100 images backed by detailed captions and supportive text, this book describes the multitude of makes and models, as well as recounting the essential role of the classic American station wagon in North American society in the 1950s, 1960s and 1970s. Contemporary brochures, period literature, factory photos and over fifty new, unpublished color photos of restored examples help convey the importance of these historic vehicles. Also featured are images of rarer Canadian versions from American manufacturers.

About the Author: Norm Mort was raised in Toronto where vehicles from every corner of the world were sold. He began taking pictures of old cars and trucks parked at the side of the road before he was ten. At 12 years of age, Norm was the youngest member on the executive of the Antique and Classic Car Club of Canada, Toronto Chapter. In the 1960s he began accumulating photos and information on motoring. Over the years his personal vehicle collection has included everything from a 1935 Morgan Trike to a 1966 Bianchina van. A writer for magazines and newspapers in the field of transport for nearly 25 years and a member of the Canadian Society of Automotive Historians, this is his seventh historic vehicles book.

Book Description Veloce, 2010. Paperback. Condition: Good. Connecting readers with great books since 1972. Used books may not include companion materials, some shelf wear, may contain highlighting/notes, may not include cdrom or access codes. Customer service is our top priority!. Seller Inventory # S_266989882

Book Description Veloce, 2010. Paperback. Condition: GOOD. Has little wear to the cover and pages. Contains some markings such as highlighting and writing. Seller Inventory # 1845842685_abe_gd

Book Description Veloce, 2010. Condition: Good. A+ Customer service! Satisfaction Guaranteed! Book is in Used-Good condition. Pages and cover are clean and intact. Used items may not include supplementary materials such as CDs or access codes. May show signs of minor shelf wear and contain limited notes and highlighting. Seller Inventory # 1845842685-2-4

Book Description Veloce, 2010. Paperback. Condition: VERY GOOD. Pages are intact and are not marred by notes or highlighting, but may contain a neat previous owner name. The spine remains undamaged. Seller Inventory # 1845842685_abe_vg

Book Description Veloce Publishing Ltd, 2010. Paperback. Condition: Good. Good condition is defined as: a copy that has been read but remains in clean condition. All of the pages are intact and the cover is intact and the spine may show signs of wear. The book may have minor markings which are not specifically mentioned. Most items will be dispatched the same or the next working day. Seller Inventory # mon0013105809