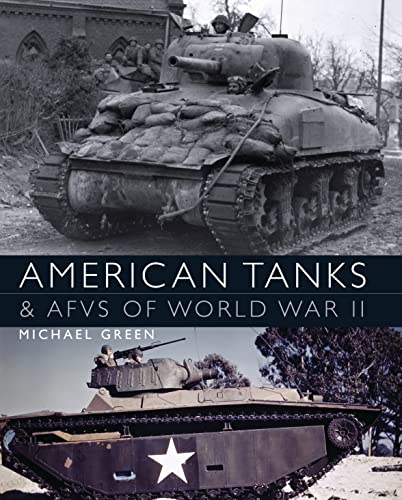 2014. Hardcover. The entry of the US into World War II provided the Allies with the manufacturing and engineering might that finally gave them the ability to take the war to the German and Japanese forces across the world. This title details the range of vehicles used during the war. Num Pages: 376 pages, illustrations (black and white, and colour). BIC Classification: 1KBB; 3JJH; HBWQ; JWMV1. Category: (G) General (US: Trade). Dimension: 250 x 192 x 34. Weight in Grams: 1504. . . . . . Books ship from the US and Ireland. Bookseller Inventory # V9781782009313

Stuart, Sherman, Lee, and Grant tanks dominated the US Army and Marine Corps armored warfare effort versus Nazi Germany and Tojo's Japan. This book details the full range of these vehicles, giving technical specifications and development features as well as describing how they were manned and fought in battle.

The equipping of the United States military with the weapons it needed to prevail during World War II was an unparalleled example of America's industrial might at the time. Among the many weapons produced by America's workers, tanks rate as an important example with 88,140 built between 1939 and 1945. This was almost twice what Germany and Great Britain built combined during the same period. These tanks not only equipped America's ground forces but saw service with many allied armies.

In addition to the 18,620 tank-based variants, such as armored engineering vehicles, self-propelled artillery, armored recovery vehicles, and tank destroyers, American factories went on to design and build thousands of wheeled armored cars for reconnaissance purposes and armored half-tracks to transport the infantry into battle behind the tanks. Like the tanks, American armored half-tracks were modified to serve a wide variety of jobs including self-propelled artillery, tank destroyers and antiaircraft vehicles. So useful were these vehicles that they would remain in service with foreign armies for decades after World War II.

To complement its inventory of tanks and armored fighting vehicles the American military industrial complex also designed and built over 18,000 amphibian tractors. Appearing in both unarmored and armored variants they went into combat with a wide variety of armaments. Referred to as the Landing Vehicle Tracked (LVT) they would serve not only with the U.S. Marine Corps who often called them "Amtracs" but the US Army who referred to them as the "Water Buffalo." They would allow the American military to take the fight to the far flung Japanese Empire wherever it had established itself in the vast reaches of the Pacific Area of Operations. These same vehicles would also see service in the ETO with the US Army and allied forces when it came time to cross various water obstacles used by the German military as defensive barriers.

Michael Green is a freelance writer, researcher, and photographer. He specializes in military subjects and has authored and coauthored more than 90 books. His books have been translated into a number of languages, including German, Japanese, and Georgian. In addition, Mr. Green has authored and coauthored numerous articles for a variety of national and international military-related magazines including Armor, The Magazine of Mobile Warfare, and Jane's Defense Weekly. Mr. Green is a lifetime member of the Marine Corps Tanker's Association and a tour guide at the Military Vehicle Technology Foundation.