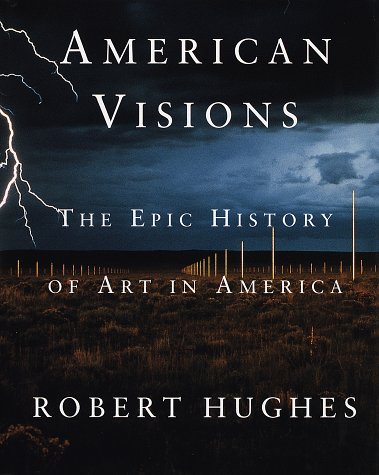 The late Robert Huges was an Australin expatriate intellectual who was the distinguished art critic for TIME magazine for many years. He also wrote on history and politics and is the author of "The Fatal Shore," perhaps the most memorable and authoritative history to date of the early settling of Australia. This is an excellent copy, of coffee table book dimensions in heft, but replete with many color reproductions of the art works under discussion, with Hughes's always informative and insightful remarks. A great book for a comprehensive look at the sweep of American art, as well as an up to date interpretation and lucid description of the American art scene, from earliest days to modern times. An UNREAD copy in AS New condition, first edition stated. This is a hefty book and will require extra postage for priority and international orders. Bookseller Inventory # 130942

Illustrator: Many color and B & W reproductions

Writing with all the brilliance, authority, and pungent wit that have distinguished his art criticism for Time magazine and his greatly acclaimed study of modern art, The Shock of the New, Robert Hughes now addresses his largest subject: the history of art in America.

The intense relationship between the American people and their surroundings has been the source of a rich artistic tradition. American Visions is a consistently revealing demonstration of the many ways in which artists have expressed this pervasive connection. In nine eloquent chapters, which span the whole range of events, movements, and personalities of more than three centuries, Robert Hughes shows us the myriad associations between the unique society that is America and the art it has produced:

"O My America, My New Founde Land"  explores the churches, religious art, and artifacts of the Spanish invaders of the Southwest and the Puritans of New England; the austere esthetic of the Amish, the Quakers, and the Shakers; and the Anglophile culture of Virginia.

"The Republic of Virtue"  sets forth the ideals of neo-classicism as interpreted in the paintings of Benjamin West, John Singleton Copley, and the Peale family, and in the public architecture of Thomas Jefferson, Benjamin Latrobe, and Charles Bulfinch.

"The Wilderness and the West"  discusses the work of landscape painters such as Thomas Cole, Frederick Church, and the Luminists, who viewed the natural world as "the fingerprint of God's creation,"  and of those who recorded America's westward expansion--George Caleb Bingham, Albert Bierstadt, and Frederic Remington--and the accompanying shift in the perception of the Indian, from noble savage to outright demon.

"American Renaissance" describes the opulent era that followed the Civil War, a cultural flowering expressed in the sculpture of Augustus Saint-Gaudens; the paintings of John Singer Sargent, Mary Cassatt, and Childe Hassam; the Newport cottages of the super-rich; and the beaux-arts buildings of Stanford White and his partners.

"The Gritty Cities"  looks at the post-Civil War years from another perspective: cast-iron cityscapes, the architecture of Louis Henri Sullivan, and the new realism of Thomas Eakins, Winslow Homer, the trompe-l'oeil painters, and the Ashcan School.

"Streamlines and Breadlines"  surveys the boom years, when skyscrapers and Art Deco were all the rage . . . and the bust years that followed, when painters such as Edward Hopper, Stuart Davis, Thomas Hart Benton, Diego Rivera, and Jacob Lawrence showed Americans "the way we live now."

"The Empire of Signs"  examines the American hegemony after World War II, when the Abstract Expressionists (Jackson Pollock, Willem de Kooning, Mark Rothko, et al.) ruled the artistic roost, until they were dethroned by Jasper Johns, Robert Rauschenberg, the Pop artists, and Andy Warhol, while individualists such as David Smith and Joseph Cornell marched to their own music.

"The Age of Anxiety"  considers recent events: the return of figurative art and the appearance of minimal and conceptual art; the speculative mania of the 1980s, which led to scandalous auction practices and inflated reputations; and the trends and issues of art in the 90s.

Lavishly illustrated and packed with biographies, anecdotes, astute and stimulating critical commentary, and sharp social history, American Visions is published in association with a new eight-part PBS television series. Robert Hughes has called it "a love letter to America."  This superb volume, which encompasses and enlarges upon the series, is an incomparably entertaining and insightful contemplation of its splendid subject.

Australian-born art critic Robert Hughes, author of the highly acclaimed study of modern art, The Shock of the New has made his home in the United States for the last 20 years. His latest undertaking, which he calls "a love letter to America," is his most massive: a 350-year history of art in America. Published in association with an eight-part PBS series of the same name, this is no scholarly text. With the same voracious wit and opinionated brilliance that have characterized his criticism for Time magazine, this tour-de-force spans three centuries of events, movements, and personalities that have shaped American society and its art. The reproductions are outstanding; 323 out of 365 are in rich, vivid color. Infinitely entertaining and perceptive, this superb book makes readers feel as if they have discovered a truer, hidden America. It seems certain to become one of the most important works in the art-historical canon.


*** NOW YOU CAN PAY DIRECTLY BY CREDIT CARD THROUGH PAYPAL.COM. SIMPLY CLICK ON
AND FOLLOW THE PROMPTS, USING MY EMAIL TO ADDRESS YOUR PAYMENT. Books may be
returned within five working days in same condition. Notice of intent to return
appreciated. Free postage for most media mail domestic orders. Heavier or
outsize books may require a premium charge for extra postage. First class, air or
overseas postage billed at cost. ou can pay by personal check, credit card or
money order in American dolla...


Shipping costs are based on books weighing 2.2 LB, or 1 KG. If your book order is heavy or oversized, we may contact you to let you know extra shipping is required. I pay postage for all USA domestic orders via media mail, unless weight requires extra postage. I also supply tracking numbers for all domestic orders.