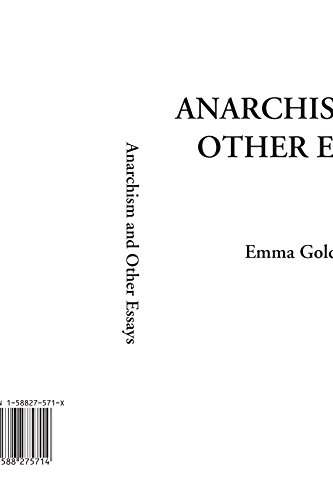 Anarchism and Other Essays

Synopsis: Emma Goldman's collection of essays "Anarchism and Other Essays".

About the Author: Emma Goldman (June 27 [O.S. June 15], 1869 – May 14, 1940) was an anarchist known for her political activism, writing, and speeches. She played a pivotal role in the development of anarchist political philosophy in North America and Europe in the first half of the 20th century. Born in Kovno in the Russian Empire (present-day Kaunas, Lithuania), Goldman emigrated to the U.S. in 1885 and lived in New York City, where she joined the burgeoning anarchist movement in 1889. Attracted to anarchism after the Haymarket affair, Goldman became a writer and a renowned lecturer on anarchist philosophy, women's rights, and social issues, attracting crowds of thousands. She and anarchist writer Alexander Berkman, her lover and lifelong friend, planned to assassinate industrialist and financier Henry Clay Frick as an act of propaganda of the deed. Although Frick survived the attempt on his life, Berkman was sentenced to 22 years in prison. Goldman was imprisoned several times in the years that followed, for "inciting to riot" and illegally distributing information about birth control. In 1906, Goldman founded the anarchist journal Mother Earth.

1. Anarchism and Other Essays

2. Anarchism and Other Essays

3. Anarchism and Other Essays

4. Anarchism and Other Essays