Items related to Applications of Plant Biotechnology : In Vitro Propagation... 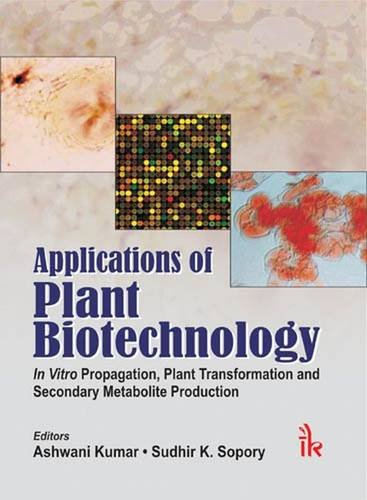 Quantity available: 1
View all  copies of this book
Buy Used
Price: US$ 101.25 Convert Currency
Shipping: US$ 27.66 From India to U.S.A. Destination, rates & speeds
Add to basket

Title: Applications of Plant Biotechnology : In ...

Ashwani Kumar, Professor, Department of Botany, University of Rajasthan, Jaipur, has earned gold medal in M.Sc, and obtained Ph.D. from Rajasthan University. He also has the distinction of being an Alexander Von Humboldt Fellow (Germany). He was the Honorary Director at the School of Life Sciences, University of Rajasthan. The author's repertoire of published works spreads across 150 research articles in various national and international journals. With an experience of over three decades in his field of research, namely, tissue culture and biochemistry, the author has been at the helm of various major projects carried out by USDA-ICAR, U.G.C., M.N.E.S., C.S.I.R and DBT. He has long association with Professor Dr. Karl-Hermann Neumann and subsequently with Professor Dr. Sven Schubert at Institut Fur Pflanzenernahrung, Justus Liebig Universitat, Giessen, Germany, as visiting Humboldt Fellow and visiting Professor at Toyama Medical and Pharmaceutical University, Toyama, Japan. The author is currently engaged in research on salinity tolerance at molecular level in cereals and crops. Recently he has been awarded the prestigious V. Puri Medal 2008. Sudhir K. Sopory, Head of Plant Molecular Biology Division at the International Centre for Genetic Engineering and Biotechnology, New Delhi, is a well-known Plant Biologist who is recognized for his contributions in research and teaching in the field of Molecular Plant Physiology and Plant Biotechnology. He obtained Ph.D. from the University of Delhi. He is a visiting scientist at Max-Planck-Institute, Kolen, and University of Munich, in Germany, and at the University of Texas, Austin and United States Department of Agriculture, Maryland, USA. Prof. Sopory is one of the pioneers in the country for adapting genetic engineering technologies for the improvement of plant productivity. He has published over 175 papers and over 50 book chapters and co-edited 8 books. Prof. Sopory has received numerous awards and distinctions including Chakravorty Award, Indian Science Congress, 1986 (given by the Vice-President of India); Shanti Swaroop Bhatnagar Award, (CSIR) 1987 (given by the Prime Minister of India); Fellow, Indian Academy of Sciences, Bangalore, 1992; Fellow, Indian National Science Academy, Delhi, 1992; Fellow, National Academy of Sciences, Allahabad, 1994; Birbal Sahni Medal, Indian Botanical Society, 2001; Fellow, National Academy of Agricultural Sciences, 2002; Tenth Godnev Award lecture of the Belarus Academy of Sciences, 2003; Vice-President, Indian National Science Academy, 2004-2006; Birbal Sahni Centenary Gold Medal Award for Life Time Achievement in Plant Sciences, Indian Science Congress Association, 2005 (given by the Prime Minister of India); Fellow: The World Academy of Sciences (Trieste), 2005; Padmashree, 2007, given by the President of India.