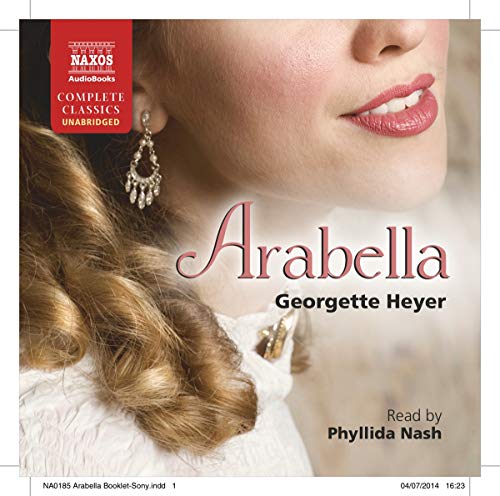 Synopsis: Perhaps the most deeply cherished novel among Heyer fans, Arabella is the story of a poor girl who captures the heart of a handsome and wealthy bachelor. When Arabella first arrives in London, she has only one mission: to snare a rich husband. With a mind to beat the competition, she pretends to be a rich heiress and soon finds herself the talk of the town, pursued by the most eligible bachelors in the city. But she has her sights on one man only: the much-hunted Mr Beaumaris. Our feisty heroine puts up a fight and deals the worldly-wise Beaumaris a deft hand in the game of love; at first grudgingly charmed, he soon becomes smitten. However, what will he think of her deceitful charade? Will it ruin her chance to be with the perfect man? Arabella contains some of Heyer's most witty dialogue and romantic banter; with its delightful and laugh-out-loud passages it is no wonder it remains the fan favourite.

Review: The prolific Georgette Heyer--author of more than 70 novels--is perhaps best known for her Regency romances. A consummate storyteller, Heyer was also an astute historian of the times she wrote about; every detail of the language, dress, and customs rings with authenticity. Arabella is one of Heyer's most charming Regency novels. In it, young Arabella Tallant, the beautiful daughter of an impoverished clergyman, comes to London for her social debut and almost immediately runs afoul of Robert Beaumaris, a wealthy, eligible aristocrat. Beaumaris suspects that Arabella engineered a carriage accident in order to meet him; Arabella, in a rage, leads him to believe that she is the heiress to a massive fortune and thus quite uninterested in his own riches.

Having set the stage for inevitable misunderstandings between this arrogant Romeo and hotheaded Juliet, Heyer then peoples it with unforgettable secondary characters. Arabella's warm heart and strong principles lead her to befriend such unsavory types as an abused apprentice to a chimney sweep, a stray dog, and a fallen woman happily known as "Leaky Peg"--all of whom she foists on the reluctant but gallant Mr. Beaumaris. Arabella is an intelligent, witty romp--both a romance with a hearty sense of humor and a historical novel that remains true to the times it depicts.