Items related to Archaeology of Precolumbian Florida (Florida and the... 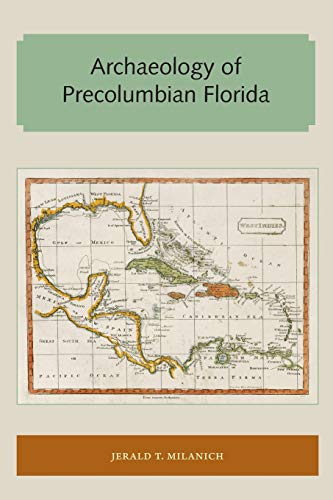 The books in the Florida and the Caribbean Open Books Series demonstrate the University Press of Florida’s long history of publishing Latin American and Caribbean studies titles that connect in and through Florida, highlighting the connections between the Sunshine State and its neighboring islands. Books in this series show how early explorers found and settled Florida and the Caribbean. They tell the tales of early pioneers, both foreign and domestic. They examine topics critical to the area such as travel, migration, economic opportunity, and tourism. They look at the growth of Florida and the Caribbean and the attendant pressures on the environment, culture, urban development, and the movement of peoples, both forced and voluntary.

The Florida and the Caribbean Open Books Series gathers the rich data available in these architectural, archaeological, cultural, and historical works, as well as the travelogues and naturalists’ sketches of the area in prior to the twentieth century, making it accessible for scholars and the general public alike.

This record of precolumbian Florida brings to life the 12,000-year story of the native American Indians who lived in the state. Using information gathered by archaeological investigations, many carried out since 1980, Jerald Milanich describes the indigenous cultures and explains why they developed as they did. In a richly illustrated book that will appeal to professional and avocational archaeologists, scholars, tourists, and local history buffs, Milanich introduces the material heritage of the first Floridians through the interpretation of artifacts and archaeological sites. Weaving together discoveries from such sites as the Lake Jackson mounds in the panhandle, Crystal River on the Gulf coast, and Granada on the Miami River, he relates the long histories of the native groups whose descendants were decimated during the European conquest of the sixteenth and seventeenth centuries. Milanich begins with an overview of the history of archaeology in Florida. He then describes the earliest aboriginal cultures: the Paleoindians and the people of the Archaic period. The later, regional cultures (Weeden Island, Fort Walton, Glades, Caloosahatchee, and many others) are correlated with geographical and environmental regions and then compared to provide insights about the nature of chiefdom societies, the effects of wetlands on precolumbian settlement systems, and the environmental history of the state. Maps and illustrations document this history of archaeological research in Florida and of the sites and artifacts (including spectacular Weeden Island pottery vessels and Belle Glade wooden carvings) left behind by the precolumbian people.