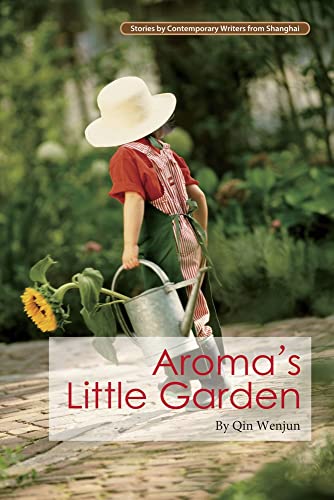 Synopsis: Aroma's Little Garden is a beautifully written novel that explores what it is like for a little girl to grow up in 20th century Shanghai, China.

Aroma is an imaginative little girl who is in touch with nature. A dancing sunflower grows in the garden that she has planted and tended but nobody really believes that it can actually dance. Not her schoolmates and not the neighbors'. This causes her trouble at school and we watch as she grapples with these problems and attempts to retain her pride.

Auntie Mai wants her to be like other children and not a "wild child" and her father tries to guide her through the pitfalls of growing up. Along the way and as she dawdles to school there are encounters with people, situations and nature itself; the handsome beetle at the side of the road, the street seller of egg rolls who teaches her how to make them and the terrifying old neighbour, grandfather of Duidui, her best friend.

In Aroma's Little Garden, Aroma is transmuted into the Shanghai childhood of the author Qin Wenjun, seemingly unsure of her stolid northern father's affections and growing up in a family that is divided between the southern elegance of her mother and grandmother for whom even a fried egg is a work of art and her father's military background and reluctance to learn the Shanghai dialect.

Written by one of contemporary China's most celebrated authors, these are tales of a Chinese child's progress to maturity and understanding in the Shanghai of an uncertain past. They are as much about children as they are for children and will appeal to children of all ages.

About the Author: Qin Wenjun is Director-General of Shanghai Board on Books for Young People (SHBBY), Vice President of Shanghai Writers' Association, and a National Committee Member of the China Writers' Association. The legacy and innovation of her work is highly representative of the current flourishing state of juvenile literature in China

Since 1982, Qin has published 48 books. Among them are novels, such as Jia Li: The Complete Biography of a Teenage Boy, The History of a Young Girl's Soul, and A Girl of Sixteen. Qin is also known for her collections of essays, such as The Music Box, and 1001 Reasons to Live. Her novel series featuring Jia Li and his friends have achieved a print run of up to 3,000,000 copies.

Qin was shortlisted for the 2002 Hans Christian Anderson Award by the International Board on Books for Young People (IBBY). She was also shortlisted for the 2009 Astrid Lindgren Memorial Award and won the Premio Letterario Internazionale Mondello Special Prize in 1996. Her novel Jia Li was named "Outstanding Novel in the 50-Year History of the People's Republic of China" and gained the "Shanghai Award for Excellence in Arts and Literature." Qin's novels have been adapted for films and TV series, and have attained China's highest honors for film and TV series. Her works have been translated into English, Dutch, Japanese, Korean, and other languages.