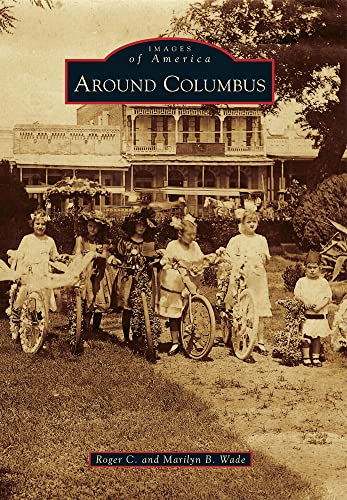 Around Columbus (Images of America)

Synopsis: Welcome to Columbus! The county seat of Colorado County, Columbus is the oldest surveyed and platted Anglo American town in Texas. It was first platted in 1823 by Stephen F. Austin and Baron DeBastrop as a possible site for the Texas capital. It was platted again in 1837 by W.B. DeWees and J.W.E. Wallace. Many of Austin’s “Old 300” settled in Columbus and the surrounding area, including Alleyton and Glidden, which were founded as railroad towns. The area played an important role in the history of Texas, including Santa Anna’s pursuit of Sam Houston’s Texas army that resulted in the burning of Columbus during the “Runaway Scrape.” Columbus suffered other setbacks, such as the long-running Stafford-Townsend feud and lawlessness resulting in disincorporation in the early 1900s, and enjoyed the good fortune of its reincorporation in the 1920s. However, today, it is a town of people who greatly value their heritage and seek to preserve it.

About the Author: Roger C. and Marilyn B. Wade live in the hamlet of Alleyton, just three miles to the east of Columbus, in the bungalow-style house built by Marilyn’s great-grandfather in 1925. The Wades are involved in the historic preservation of Colorado County, and each recently received a certificate in public history studies from Texas State University–San Marcos.

1. Around Columbus (Images of America)

Book Description Arcadia Publishing, 2012. Paperback. Condition: Good. Connecting readers with great books since 1972. Used books may not include companion materials, some shelf wear, may contain highlighting/notes, may not include cdrom or access codes. Customer service is our top priority!. Seller Inventory # S_275923237

2. Around Columbus (Images of America)

Book Description Arcadia Publishing, 2012. Condition: Good. A+ Customer service! Satisfaction Guaranteed! Book is in Used-Good condition. Pages and cover are clean and intact. Used items may not include supplementary materials such as CDs or access codes. May show signs of minor shelf wear and contain limited notes and highlighting. Seller Inventory # 0738585440-2-4

3. Around Columbus (Images of America)

4. Around Columbus (Images of America)

5. Around Columbus (Images of America)

7. Around Columbus (Images of America)