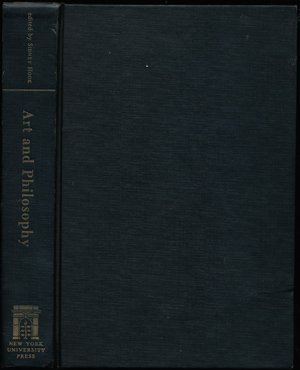 Art and Philosophy: A Symposium

Synopsis: "A quest for clarificatin & understanding language of artistic judgment"

About the Author: Sidney Hook was born and educated in New York City and taught, very early in his career, in the city's public schools. Morris Cohen was among his teachers at City College; he later studied under John Dewey at Columbia University, where he received his Ph.D. in 1927. He immediately began teaching at New York University, where he subsequently served as chairman of the philosophy department at the Washington Square College, head of the graduate department, and head of the all-university department, retiring from this post in May 1968. An early Marxist in his fervent desire for social reform, Hook was deeply impressed by his teachers Cohen and Dewey. He continued to espouse a form of Marxism that he termed "democratic socialism." Hook was an early anti-Communist, denouncing communism as practiced in the Soviet Union. Hook opposed all intolerant ideologues. For example, he was an early critic of Joseph Stalin, but bitterly opposed the American senator Joseph McCarthy, a major anti-Communist politician of the early 1950s. During the 1960s and 1970s, Hook advocated extremely conservative views on foreign policy and domestic issues. He opposed affirmative action and preferential hiring of minorities. "As a philosopher, Hook's most distinctive contribution is his theory of democracy. . . .On occasions too numerous to count, Hook has attempted to elucidate the objective meaning of democracy, to canvas the objections raised against it, to marshal the arguments in its behalf, and, as behooves the philosopher, to examine the kinds of theoretical justifications that from time to time come forth in its' support. . . His early books, Towards the Understanding of Karl Marx and From Hegel to Marx, are by far the best expository, interpretive, historical, and critical studies of Karl Marx's thought ever written by an American philosopher. . . .Persistently criticizing the historical determinism of orthodox Marxism, Hook argues that history contains the contingent and the unforeseen and, further, that individual men play important roles in the making of history" (Andrew Reck, The New American Philosophers). The Hero in History features this idea. Hook received Guggenheim Fellowships in 1928 and 1953 to study European philosophy, traveling to Russia and Germany, and was granted a Ford Foundation Fellowship in 1958 to study Asian philosophy and culture. As founder of New York University's Institute of Philosophy, he edited a series of volumes recording the symposia it conducted, symposia on the cutting edge of philosophical research. Hook also served as Thomas Jefferson Lecturer at the Library of Congress, the most distinguished appointment in the humanities to be offered by the federal government of the United States.

1. Art and Philosophy: A Symposium

Book Description New York Univ Pr, 1966. Condition: Good. Ships from the UK. Former Library book. Shows some signs of wear, and may have some markings on the inside. Seller Inventory # GRP89341271

2. Art and Philosophy: A Symposium

Book Description New York Univ Pr, 1966. Condition: Good. Shows some signs of wear, and may have some markings on the inside. Seller Inventory # GRP108674259

3. Art and Philosophy: A Symposium

Book Description New York Univ Pr. Hardcover. Condition: Good. A copy that has been read, but remains in clean condition. All pages are intact, and the cover is intact. The spine may show signs of wear. Pages can include limited notes and highlighting, and the copy can include previous owner inscriptions. An ex-library book and may have standard library stamps and/or stickers. The dust jacket is missing. At ThriftBooks, our motto is: Read More, Spend Less. Seller Inventory # G0686865278I3N11

4. Art and Philosophy: A Symposium

Book Description New York Univ Pr, 1966. Condition: Good. A+ Customer service! Satisfaction Guaranteed! Book is in Used-Good condition. Pages and cover are clean and intact. Used items may not include supplementary materials such as CDs or access codes. May show signs of minor shelf wear and contain limited notes and highlighting. Seller Inventory # 0686865278-2-4

5. Art and Philosophy: A Symposium

6. Art and Philosophy: A Symposium

7. Art and Philosophy: A Symposium

8. Art and Philosophy: A Symposium