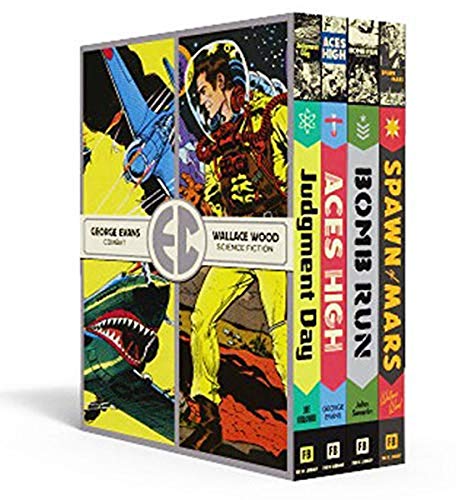 Joe Orlando (1927–1998; Will Eisner Hall of Fame, 2007) was a prolific illustrator, writer, editor, and cartoonist who rose from artist at EC Comics to vice president at DC Comics.

John Powers Severin (1921–2012; Will Eisner Hall of Fame, 2003), who had a "realistic" comics style,  specialized in war, western, and humor comics. One of Mad’s founding artists, he worked for with Cracked magazine for forty-five years.

George Evans (1920–2001) worked as a World War II aircraft mechanic, which informed his depiction of all kinds of airplanes in breathtaking aerial acrobatics. He was the regular artist on the newspaper strip Secret Agent Corrigan (a.k.a. Secret Agent X-9) from 1980 until his retirement in 1996.

Wallace Allan Wood (1927–1981) rebooted Marvel's Daredevil, designing the iconic costume that recently appeared on the smash hit Netflix series. He was one of the best and funniest cartoonists of the earliest iteration of Mad magazine and, thanks to his work on the EC Comics line, he is also widely considered one of America’s greatest science-fiction cartoonists. With his magazine anthology witzend, he helped pioneer underground/independent comics publishing.