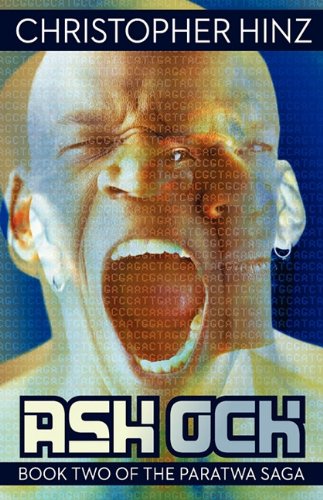 Synopsis: A quarter of a millennium ago, before the nuclear apocalypse forced the inhabitants of earth to flee their home planet, few humans could have imagined the course their path would take. Now, the orbital colonies are the final sanctuary of humanity and life is more dangerous than ever before. The colonists fear the return of their dreaded enemies, the Paratwa―ferocious warriors who are genetically engineered to exist in two bodies which remain telepathically connected. The new generation of Paratwa is far deadlier than the old, forming a powerful caste of fighter known as the Ash Ock. A mysterious virus infecting the humans database signals the return of their most feared enemies...

From Publishers Weekly: This second book of the Paratwa Saga (a trilogy is planned) maintains the stylish writing and plotting of Hinz's Leige-Killer , which first introduced the Paratwa--genetically enhanced, telepathically connected pairs of trained killers--and Gillian and Nick, hunters who stalk the Paratwa in the satellite colonies orbiting a demolished Earth. The scattered hints of a future conflict present in the first book are developed here, with the addition of several new threads, most of which await resolution in the third volume. Here the colonists learn that the generation starships which fled the devastated Earth have been commandeered by the Ash Ock, five pairs of Paratwa leaders who are attempting to dominate humanity. Evidence of fresh Paratwa massacres prompts the waking of Nick and Gillian from 56 years of scientifically controlled slumber. Deadly seductresses, unstable ingenues and scheming scientists populate the fanciful adventures that ensue.
Copyright 1989 Reed Business Information, Inc.

Book Description e-reads.com, 2010. Condition: Good. A+ Customer service! Satisfaction Guaranteed! Book is in Used-Good condition. Pages and cover are clean and intact. Used items may not include supplementary materials such as CDs or access codes. May show signs of minor shelf wear and contain limited notes and highlighting. Seller Inventory # 1617561371-2-4

Shipping: US$ 3.24
From Germany to U.S.A.
Destination, rates & speeds
#renderBDPScripts()