Items related to The Ashes of Worlds (Saga of Seven Suns) 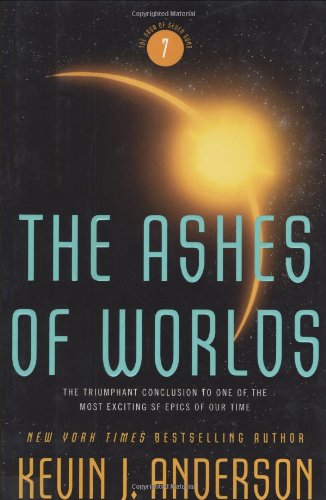 The Ashes of Worlds (Saga of Seven Suns)

Quantity: 1
View all  copies of this book
Buy New
Price: US$ 19.44 Convert Currency
Shipping: US$ 4.29 Within U.S.A. Destination, rates & speeds
Add to basket

Title: The Ashes of Worlds (Saga of Seven Suns)

The culminating volume in Kevin J. Anderson's Saga of Seven Suns weaves together the myriad storylines into a spectacular grand finale.
Galactic empires clash, elemental beings devastate whole planetary systems, and the factions of humanity are pitted against each other. Heroes rise and enemies make their last stands in the climax of an epic tale seven years in the making. The Saga of Seven Suns is one of the most colorful and spectacular science fiction epics of the last decade.

Kevin J. Anderson has written 41 national bestsellers and has over 20 million books in print worldwide in thirty languages. He has been nominated for the Nebula Award, the Bram Stoker Award, and the SFX Readers' Choice Award. Find out more about Kevin Anderson at www.wordfire.com.

We are committed to providing each customer with the highest standard of customer service.