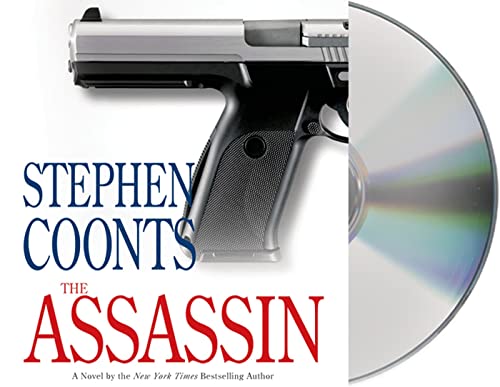 The Assassin: A Novel (Tommy Carmellini)

From Stephen Coonts comes a novel of high octane excitement, featuring Tommy Carmellini in his most dangerous mission yet.

In the finale of Coonts's last novel The Traitor, the ruthless and brilliant Al Qaeda leader who nearly succeeded in blowing up a meeting of the Group of 7 in Paris slipped the noose and escaped.  But Abu Qasim has another trick up his sleeve: he has offered to pay a  the Mafia a fortune to help him  bring New York to its knees.

The CIA learns that something is up and a worried president sends his best--Jake Grafton and his secret weapon, Tommy Carmellini. Tommy is soon in grave danger as he tries to piece the deadly puzzle together. Set amidst ticking bombs and flying bullets, the stakes have never been higher. Will Tommy put it all together in time t stop the disaster? Or will the terrorists set events in motion that will leave America reeling?

Ruthless al Qaeda leader Abu Qasim has escaped from the grasp of the Americans and is plotting his next move. International commanders aim to destroy Qasim and his inner circle before he can strike again. But after the mysterious death of a high-ranking official, it soon becomes clear that there’s a leak within the ranks of the Westerners...and that Qasim has turned the tables on his rivals. Now he’s the one  targeting them—and his aim is to kill.

AN INTERNATIONAL UPRISING
Admiral Jake Grafton dispatches special agent Tommy Carmellini to infiltrate the terrorist plot. He tracks the gorgeous and seductive Marisa Petrou, a Frenchwoman who may be Qasim’s daughter and who may or may not wish him dead.

A DEADLY RACE AGAINST TIME...
Who is behind the assassinations of the wealthy and powerful Western vigilante team? Will Qasim slip the noose once again? As the stakes grow higher, and top brass face greater risk than ever before, it’s up to Carmellini to put a stop to a master of terror—before he unleashes even more death across the globe.

Book Description Macmillan Audio, 2008. AudioCD. Condition: Good. 9 AUDIO CDs withdrawn from the library collection in the clamshell case with library sticker and marking. We will polish each of the Audio CDs for a smoother listening experience. You will receive a worthwhile set. Enjoy this reliable AUDIO CD performance. Seller Inventory # AudioBox6511041

Book Description Macmillan Audio, 2008. Audio Book (CD). Condition: Good. 9 AUDIO CDs withdrawn from the library collection in the clamshell case with library sticker and marking. We will polish each of the Audio CDs for a smoother listening experience. You will receive a worthwhile set. Enjoy this reliable AUDIO CD performance. Seller Inventory # AudioBox6511080

3. The Assassin: A Novel

Book Description Macmillan Audio 2008-08-05, 2008. Audio CD. Condition: Good. Item is in good condition. Some moderate creases and wear. This item may not come with CDs or additional parts including access codes for textbooks. Might be an ex-library copy and contain writing/highlighting. Seller Inventory # DS-1593979576-3

4. The Assassin: A Novel (Tommy Carmellini)

5. The Assassin: A Novel (Tommy Carmellini)

6. THE ASSASSIN: A NOVEL (TOMMY CAR