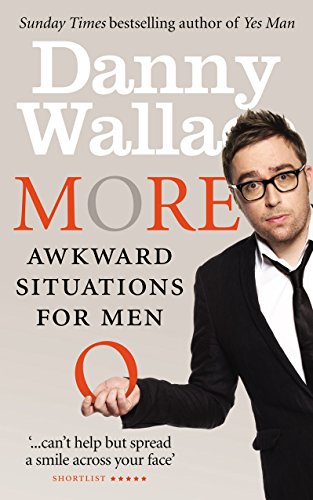 Synopsis: In 2010's brilliant AWKWARD SITUATIONS FOR MEN, Danny Wallace entertained us with wonderful bite-sized stories from his often embarrassing and bewildering everyday life as a man. Well, now it's 2011 and Danny is back - and he's even more confused than ever! A lot has happened to Danny Wallace in the past year. He has had a baby and has been hobnobbing with the powers that be in Hollywood. But that hasn't made him any less awkward. Being more of a grown up brings its own baffling etiquette and expected social graces, and no-one has told Danny. Join Danny once again on his very funny stumble through more Awkward Situations. It's not easy being a man!

About the Author: Danny's first solo book, Join Me, was described as a 'word-of-mouth phenomenon' by The Bookseller and 'one of the funniest stories you will ever read' by the Daily Mail. His second book, Yes Man - in which he decided to say 'Yes' to everything - was described as 'hilarious' by several national newspapers. The Warner Bros. film adaptation of Wallace's book Yes Man, starring Jim Carrey in the lead role, was released in December 2008 and grossed $230,000,000 worldwide. Danny's third book Friends Like These, described by The Bookseller as 'another comedy masterpiece' is currently in development as a major project by Miramax. Danny Wallace is PPA's Columnist of the Year 2011. Danny Wallace was recently shortlisted for PPA Columnist of the Year for his weekly column in Shortlist Magazine, 'Danny Wallace is a Man', which formed the starting point for his book Awkward Situations for Men. In 2010, American television network ABC commissioned a pilot of Awkward Situations for Men, starring Danny in the lead role. Danny lives in North London with his wife and baby. Find out more about Danny at www.dannywallace.com.

Book Description Ebury Press, 2011. Paperback. Condition: Used; Very Good. Dispatched, from the UK, within 48 hours of ordering. Though second-hand, the book is still in very good shape. Minimal signs of usage may include very minor creasing on the cover or on the spine. Seller Inventory # CHL1023631

Book Description Ebury Press, 2011. Paperback. Condition: Used; Good. Dispatched, from the UK, within 48 hours of ordering. This book is in good condition but will show signs of previous ownership. Please expect some creasing to the spine and/or minor damage to the cover. Damaged cover. The cover of is slightly damaged for instance a torn or bent corner. Seller Inventory # CHL4560310

Book Description Ebury Press 30/06/2011, 2011. Condition: Good. Will be shipped promptly from UK warehouse. Book is in good condition with no missing pages, no damage or soiling and tight spine. There may be some dog-eared pages showing previous use but overall a great book. Seller Inventory # 9053-9780091941307

Book Description Ebury Press, 2011. Paperback. Condition: Very Good. Very Good condition with no significant faults. Clearly used but very few minor defects. Will look good on your book case after reading but may not be suitable as a present unless hard to find elsewhere MOST IMAGES ARE STOCK PHOTOS. IF YOU NEED A PARTICULAR EDITION PLEASE SEND US A MESSAGE BEFORE PURCHASING SO THAT WE CAN CHECK THAT THE ONE ON OFFER IS THE ONE YOU REQUIRE. SECURE DAILY POSTING FROM UK. 30 DAY GUARANTEE. Seller Inventory # mon0002544033

Book Description Ebury Press 30/06/2011, 2011. Condition: Very Good. This book is in very good condition and will be shipped within 24 hours of ordering. The cover may have some limited signs of wear but the pages are clean, intact and the spine remains undamaged. This book has clearly been well maintained and looked after thus far. Money back guarantee if you are not satisfied. See all our books here, order more than 1 book and get discounted shipping. . Seller Inventory # 7719-9780091941307

Book Description Ebury Press 30/06/2011, 2011. Condition: Very Good. Shipped within 24 hours from our UK warehouse. Clean, undamaged book with no damage to pages and minimal wear to the cover. Spine still tight, in very good condition. Remember if you are not happy, you are covered by our 100% money back guarantee. Seller Inventory # 6545-9780091941307

Shipping: US$ 2.58
From United Kingdom to U.S.A.
Destination, rates & speeds