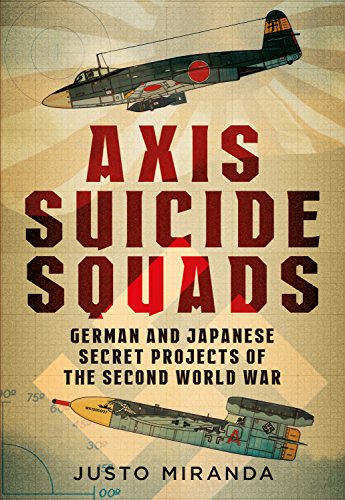 By mid-1944 the Axis missile guidance systems were systematically interfered by the Allies superior technology. As an emergency measure, Germany was forced to use the Soviet tactics of fighter-taran against the American bombers, while Japan used the terminal dive bomber ritual against the invasion fleets and designed new airplanes to that purpose. Num Pages: 288 pages, 128 black and white illustrations. BIC Classification: 1DFG; 1FPJ; 3JJH; HBWQ; JWL. Category: (G) General (US: Trade). Dimension: 182 x 255 x 23. Weight in Grams: 752. . 2017. Hardcover. . . . . Books ship from the US and Ireland. Bookseller Inventory # V9781781555651

During the Second World War both Germany and Japan developed several types of anti-aircraft and anti-ship missiles. Unfortunately for them, the Allies were technologically superior in electronic warfare by mid-1944, just in time to interfere the guidance systems of first generation. The Japanese thought to have found the tactic to stop the invasion fleets, with the ritual of the terminal dive bombing. The Germans adapted their Sturmjäger squadrons to the Taran tactics learnt from the Soviets. Once the radio frequency war was lost, the Axis scientists tried to develop other control techniques. But the acoustic, electrostatic and infrared sensors, together with the TV guidance system, were not ready on time and broken cables made the wire guided bombs frequently fail. Both countries began to design ramming fighters and suicide bombers when the futile devastation of their cities by the Allies bombers ensured that, when the time comes, there would not be lack of volunteer pilots. But this book is just about machines, depicting all known designs of all Axis suicide airplanes and panic fighters.

Born with the B-52, this tech drawer and Spanish Air Force Museum advisor uses advanced drawing methods to rebuild historical aircraft, starting from original parts. Historian specialized in German Secret Weapons; he usually works in the twilight zone between rational engineering and Nazi esotericism, without letting himself being dragged by the dark side of the force. His research has helped to deconstruct several myths on the flying saucers and the Hitler A bomb. Justo has published six books and thirty monographs on aeronautical subjects. He lives in Madrid with his wife Paula, journalist at Reuters and co-author of his works.