Items related to A BLESSING ON THE MOON

Home Skibell, Joseph A BLESSING ON THE MOON
Stock Image 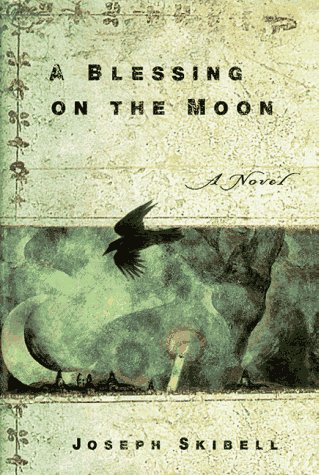 A BLESSING ON THE MOON

Title: A BLESSING ON THE MOON

At the center of A Blessing on the Moon is Chaim Skibelski. Death is merely the beginning of Chaim’s troubles. In the opening pages, he is shot along with the other Jews of his small Polish village. But instead of resting peacefully in the World to Come, Chaim, for reasons unclear to him, is left to wander the earth, accompanied by his rabbi, who has taken the form of a talking crow. Chaim’s afterlife journey is filled with extraordinary encounters whose consequences are far greater than he realizes.

Not since art Spiegelman’s Maus has a work so powerfully evoked one of the darkest moments of the twentieth century with such daring originality.

Chaim Skibelski rises from a pit of slaughter, leaving his dead townsmen and family behind, and returns to his home--now occupied by non-Jews. "In front of every house were piles of vows and promises, all in broken pieces. How I could see such things," he wonders, "I cannot tell you." So begins this magic-realist fiction, which is also a keen allegory of European Jews' war and postwar experience. "You think they can't kill us as often as they wish?" the narrator cries, and his distrust seems right. Though Chaim and the Rebbe are the only ones to have escaped the sudden roundup, they too, it soon becomes clear, are dead. The Rebbe has been transformed into a crow while Chaim's body seeps with blood and half of his face is missing. But if he's dead, why isn't he in the World to Come and why can some Poles and one German soldier see and hear him?

In his first novel, Joseph Skibell has created a fantasia both hideous and beautiful, a combination of mysticism, nightmare, and even humor. After Chaim and the Rebbe dig up other putrefied victims, the sorry, brave group moves painfully away from the village. Freezing days pass, perhaps years. "If you were the Rebbe, floating high above us, what you would see would be a great river of blood cutting a swath through the frozen winter hills." The author anatomizes the pilgrims' differences, cultural and religious, with love and wit. They are disputatious even in death--their debates threatening to overwhelm what holds them together. Though the phrase tour de force has been much abused, A Blessing on the Moon is exactly that: a daring fiction that shouldn't succeed on any level yet works on many.