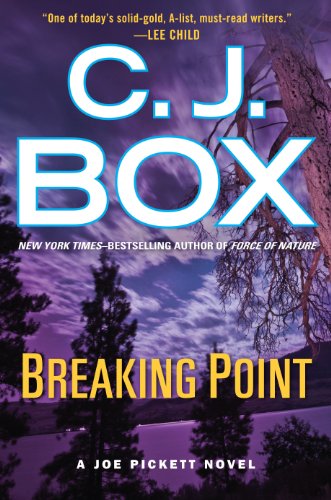 Breaking Point, however, takes Joe Pickett into uncharted territory. The question is: What will he do when he gets there?

It was always good to see Butch Roberson, Joe thought—a hardworking, upright local business owner whose daughter was friends with his own. Little did he know that when he talked to Butch that day in the forest, the man was about to disappear. He was heading into the mountains to scout elk, he said, but instead he was running. Two EPA employees had just been murdered, and all signs pointed to him as the killer.

As the manhunt organized itself, Joe heard more of the story—about the tract of land Butch and his wife had bought to build their retirement home on, until the EPA declared it a wetland. About the penalties they charged him when he balked, new ones piling up every day, until the family was torn apart . . . and finally, it seems, the man just cracked.

It was an awful story. But was it the whole story? The more Joe looks into it, the more he begins to wonder—and the more he finds himself in the middle of a war he never expected and never wanted. Powerful forces want Roberson not just caught but dead—and the same goes for anyone who stands in their way.

Every man reaches his breaking point. Joe Pickett may just have reached his.

C. J. Box is the author of thirteen Joe Pickett novels and three stand-alones, and has won the Edgar, Anthony, Macavity, Gumshoe, and Barry Awards, as well as the French Prix Calibre .38. His most recent Joe Pickett novel, Force of Nature, debuted at #3 on the New York Times bestseller list. He lives outside Cheyenne, Wyoming, with his family.